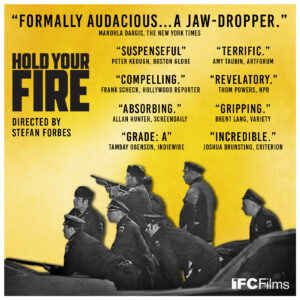 touchstone of hyper-aggressive police tactics and community relations. In 1973, four young African-American Muslim men entered a sporting goods store in Williamsburg, Brooklyn to steal guns. They were soon cornered by a score of New York police. The bungled robbery triggered a response of deadly force by a then mostly-white police force and led to the longest hostage siege in NYPD history. The stand-off eventually became, could a visionary police psychologist,  Harvey Schlossberg, convince his superiors to do the unthinkable –  negotiate with

“criminals” – and save twelve hostages from a violent bloodbath? In never-before-seen film and eye-opening interviews, HOLD YOUR FIRE is a look into a policing regime that could revolutionize the ways that American law

enforcement protects the citizenry and saves lives in the process. Director Stefan Forbes, (Boogie Man: The Lee Atwater Story) producer Fab Five Freddy (Grass is Greener) and their team reconstruct what took place through the Rashomon-like perspectives of the robbers, hostages, and cops.

For updates and screenings go to: holdyourfirefilm.com

About the filmmaker – Producer Fred Brathwaite, popularly known as Fab 5 Freddy, is an American visual artist, filmmaker, and hip hop pioneer. He is considered one of the architects of the street art movement and was the first host of the groundbreaking hip-hop music video show Yo! MTV Raps. Fred recently directed the Netflix feature documentary Grass Is Greener about the history of cannabis, race, and criminal justice in America.

About the filmmaker – Producer Tia Wou is an entrepreneur and producer of the award-winning documentary film Boogie Man: The Lee Atwater Story, a Critic’s Choice in the New York Times and the Washington Post, which called it “one of the best political films ever.”

“Given that peaceful resolution in police encounters remains such a contemporary issue, too, Hold Your Fire has the feeling a key battle revisited in a tragically long, ongoing conflict.” – Jake Coyle, Associated Press

“A searing look into a little-known moment in history with profound repercussions for how we understand policing today.” – Tambay Obenson, indieWire

“Hold Your Fire’ feels like walking through an interactive museum exhibit. There isn’t narration, but rather the words of the survivors who were in the middle of it all, which brings an extra layer of authenticity.” – Cassondra Feltus, Black Girl Nerds

“What emerges is a kaleidoscopic narrative that lays bare the disconnect between the officers and the communities they serve.” – Concepción de León, New York Times