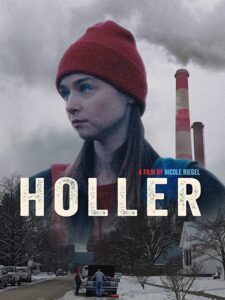 pocket of Southern Ohio where American manufacturing and opportunity are drying up, a determined young woman finds a ticket out when she is accepted to college. Alongside her older brother, Ruth Avery joins a dangerous scrap metal crew in order to pay her way. Together, they spend one brutal winter working the scrap yards during the day and

stealing valuable metal from the once thriving factories by night. With her goal in sight, Ruth finds that the ultimate cost of an education for a girl like her may be more than she bargained for, and she soon finds herself torn between a promising future and the family she would leave behind. Director Nicole Riegel stops by for a conversation on the challenges of pulling together a shoe-string budget film, that has as much to say about the lack of opportunity for the millions of marginalized people as it does about the love of family, and working with a superb cast that includes Jessica Barden, Austin Amelio, Gus Halper and Pamela Adlon.

For news, updates and screening go to: ifcfilms.com/films/holler

Director’s Statement – My film is a semi-autobiographical story about how challenging it was to transcend where I came from as a young woman, both practically and emotionally. Like Ruth, the teenage girl at the center of my story, and many young girls across America, I was vulnerable to a fractured system that felt rigged against me, particularly when it came to access to education for young people living in the margins. That lack of access made me feel like my voice didn’t matter, and that is a horrible feeling for any young girl to carry with her. In order to pursue the life that I wanted, I had to leave behind the family and community that created me which felt like a betrayal. HOLLER is not only a glimpse into that part of my life, but also a window into the lives of thousands of girls who, like Ruth, live in towns that are currently in a state of atrophy from fewer opportunities and a shrinking population. They are faced with the choice of forced reinvention or abandoning their hometowns completely. – Nicole Riegel

“Holler shows there is beauty everywhere-if you choose to look for it. It also shows the power of independent filmmaking to tell incredible stories on sheer will and desire to tell stories.” – Alan Ng, Film Threat

“A film that is heart-rattlingly poignant, haunting, and among the best of the year.” – Kristy Puchko, Pajiba

“Holler is a compelling, confident film about family, loyalty, hope and self-care, executed with a firm directorial vision and speaking with an authenticity and genuineness that is unambiguously refreshing.” – Alexandra Heller-Nicholas, AWFJ Women on Film