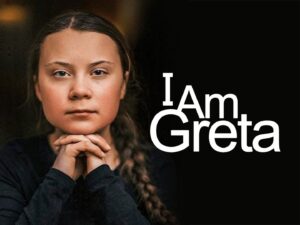 outside her country’s Parliament building in Stockholm. At first she sat alone, handing out information and answering questions from passersby. Slowly, others began to join her—and within months she had sparked a worldwide movement. I AM GRETA offers a personal and inspiring glimpse inside Greta’s path to becoming an internationally known environmental activist. Shot in the style of cinéma vérité and with support from the Thunberg family, cameras capture Greta’s meetings with government leaders, headline-making public appearances, and global protests. But they also depict Greta’s life

outside of the moments visible on news channels worldwide: laughing at home 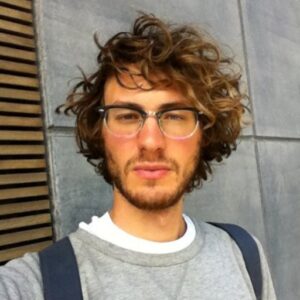 with her family, writing impassioned speeches, and trying to handle the mounting stress of nonstop travel, public scrutiny and becoming the face of the climate change cause. The film culminates with Greta’s arduous two-week journey by sailboat to the UN Climate Action Summit in New York City, where she’s greeted by crowds chanting her name. (Greta stopped f

lying because of the high emissions caused by air travel.) Today, her #FridaysForFuture movement has organized climate strikes on every continent except Antarctica. As she tells the UN, “The world is waking up, and change is coming whether you like it or not.” Director Nathan Grossman joins us to talk about his filmmaker instinct to document Greta Thunberg’s first days in front of the Swedish Parliament, the remarkable level of trust he had with Greta and her family as he chronicled the tale of a young woman determined to hold the most powerful people in the world accountable for their pathological abuse of Planet Earth.

For news and updates go to: iamgretafilm.com

A Statement from Greta – “I really like the film and I think it gives a realistic image of myself and my daily life. I hope anyone who watches the film can finally understand that we young people aren’t school striking just for fun. We are protesting because we don’t have a choice. A lot has of course happened since I started school striking, but sadly we are still stuck on square one. The changes and the level of awareness needed are nowhere to be seen today. All that we ask for is for our society to treat the climate crisis as a crisis, and give us a safe future. I think the film shows just how far that is from happening right now. It shows that the urgency of the scientific message isn’t getting through.” – Greta Thunberg

About the filmmaker – Nathan Grossman is educated at The Stockholm Academy of Dramatic Arts. He started his career as a stills photographer for Rolling Stone India and later moved into documentary filmmaking, mainly focusing on environmental issues. In 2015 Nathan got the world’s attention for his short film The Toaster Challenge where an athlete tries to generate energy to toast a slice of bread. The video became a global phenomenon with over 15 million views. 2017 Nathan completed his first full-length tv-series for public broadcaster SVT, about the growing meat consumption in Sweden. The show sparked a big discussion about meat consumption in Sweden and got nominated for best factual program of the year.

“INTIMATE AND URGENT. Thunberg’s very existence has been politicized by both friend and foe, but “I Am Greta” is intent on reminding people that she’s really just a kid who has a big dream.” – Kate Erbland, IndieWire

“[Grossman’s] straightforward yet utterly compelling documentary invites us into the life of a remarkable teenager who is sure to accomplish even more remarkable things in the years to come.” – Andrew Collins, Radio Times