In this timely documentary. I AM NOT ALONE follows the 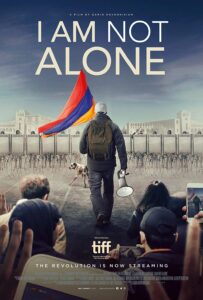 remarkable journey of a man who put on a backpack on Easter day in 2018, and went live on Facebook to announce that he was beginning a walk across Armenia. His mission: to inspire a velvet revolution — and topple the corrupt regime that enjoys absolute power in his post-soviet nation. With total access to all key players, I AM NOT ALONE tells the miraculous true story of what happens in the next 40 days. Garin Hovannisian’s gripping documentary deftly follows the

efforts led by journalist, politician, and activist Nikol Pashinyan to prevent the election of the country’s president, Serzh Sargsyan, as the new prime minister — a move that would essentially put Sargsyan in control of Armenia for life, making him a de facto dictator. I AM NOT ALONE 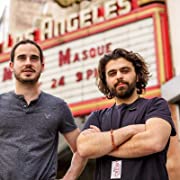 chronicles an unforgettable political drama that is an emotional and inspiring roadmap for how a true democratic movement can achieve profound change against all odds. It is packed with rich and memorable characters, plot twists, and a true hero’s journey. Producer Alec Mouhibian joins us to talk about the Nikol Pashinyan’s history of challenging the powerful, the history of the region that includes Armenia and the strength and determination of the Armenian people to survive and thrive.

For news and updates go to: iamnotalonefilm.com

Watch in the Los Angeles area go to: laemmle.com/film/i-am-not-alone

To watch virtually go to: watch.laemmle.com

Director’s Statement – For as long as I can remember, I’ve been going out to the protests.As a kid in the late 1980s, I’d sit on my father’s shoulders and head to Liberty Square to demand our independence from the Soviet Union. I remember the euphoria, in 1991, when Communism fell — and Armenia was free again. But it did not take long for the old soviet symptoms to reappear. Corruption and poverty plagued our country. As the oligarchs grew rich and powerful, the people lived in misery. There never was a fair trial in Armenia, and never a free election.  So we began to protest our own rulers. That’s me in the black shirt, by the way. That’s my father to my left. In 2013 he ran for president against the all-powerful military commander Serzh Sargsyan. The official results gave him 37%, but the people knew the truth. The picture captures us moments before we reached the riot police at Baghramyan Boulevard.We lost that year. Just like we’d lost the year before. And would lose the year after. But it didn’t matter. We made a promise to each other that we would never stop fighting. We would never give up the struggle. We saw ourselves as flakes of snow, quietly gathering upon a mountain, preparing for the day when a final flake would fall — and set off the avalanche. And as we struggled for democracy, I filmed. Every time a new protest erupted, I picked up my camera and headed for the streets. I filmed the peaceful youth protests of Electric Yerevan. I filmed the violent uprising of the Daredevils of Sassoun. In my apartment in Armenia, I have a box full of hard drives that contain thousands of hours of footage of fading movements, failed revolutions, unfinished movies.So when on Easter Sunday 2018 a man put on a backpack and announced that he was going to walk across Armenia and inspire a revolution, I had no reason to believe that this time would be different. I just did what I’d always done. I picked up my camera and headed for the streets. It did not cross my mind that I was making a film, or that an avalanche was coming.  – Garin Hovannisian

About the filmmaker – Alec Mouhibian is a writer, filmmaker, and comedian from Los Angeles. With Garin Hovannisian, he co-wrote/directed the feature film 1915 (2015). He is also the producer of Children of War (2017) and has covered Armenia’s struggle for freedom for American magazines since 2012. He is the co-founder of Avalanche Entertainment, through which he is creating a variety of forthcoming projects for film and television, including Red Curtain, an anthology series set in the post-Soviet world.

“The best film I’ve seen in ’20…should be an Oscar contender…absolutely outstanding — stranger than fiction and tremendously inspiring.” – Scott Feinberg, Hollywood Reporter

“This unbelievably inspiring film is for anyone who doesn’t believe in the power of protests” – Musanna Ahmed, Film Inquiry

“I Am Not Alone is an inspiring portrait of democratic self-determination.” – Sheri Linden, Hollywood Reporter

“The magnificent I Am Not Alone is a call to action to all of us, for none of us are alone when we stick together. It’s a comforting thought in these perilous times.” – Christopher Llewellyn Reed, Hammer to Nail

“While unabashedly pro-Pashinyan, the film reveals a bit more than it probably intends to about what it takes to bring about mass political change in the age of social media, neoliberal branding, and shifting global ideologies.” – Michael Sicinski, Cinema Scope