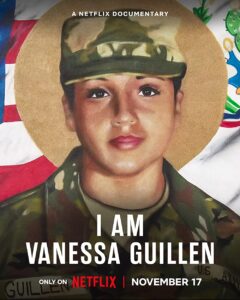 American soldier who vanishes from a U.S. Army base. Her family leads an international movement to find her and expose ongoing corruption within the military ranks. Vanessa Guillen always dreamed of joining the U.S. Army, but after reporting being sexually harassed at Fort Hood in Texas, she disappeared. After a two-month search, her remains were found in a nearby rural area, sparking rage at Army officials – and a fight for justice. I AM VANESSA GUILLEN follows Vanessa’s sisters Lupe and Mayra as they carry her name from protests in the streets to

the halls of power in Washington, D.C., and offers a behind-the-scenes look at their tenacious pursuit to change a deeply rooted, controversial military justice system. Featuring interviews with family and friends as well as elected officials like Rep. Jackie Spears and Sen. Kirsten Gillibrand, I AM VANESSA GUILLEN is a bracing, candid

testament to what a family’s love can do, even in the face of unimaginable grief. The film was executive produced by Story Syndicate’s Dan Cogan, Liz Garbus, Jon Bardin and Nell Constantinople. Director by Christy Wegener joins us for a conversation on the under-reported incidents of sexual assault that are rife in all branches of the United States military, the steely determination of Vanessa’s family to find her, bring justice to her murder and organize a sustained effort to bring accountability to the unaccountable military chain of command.

About the filmmaker – Christy Wegener is a director, writer and producer chiefly focused on stories that integrate both the tragedy and triumph of the human experience. In 2021, she founded Conduit Films, a production company devoted to character-driven stories with cultural resonance. Prior to founding Conduit Films, Wegener was a showrunner, writer and director, working in non-fiction and narrative.  She’s produced and written more than two-dozen films and TV series, including four seasons of Oprah’s NAACP and EMMY award-winning biography series, MASTERCLASS, crafting notable episodes about Whoopi Goldberg, Ellen Degeneres, JayZ, Susan Sarandon, Berry Gordy and Lenny Kravitz.  In 2022 she developed the hit PBS series, AMERICA OUTDOORS, which was a Jackson Wild Award finalist. She directed the notable short documentary, CLIMATE, that debuted on 80-foot screens in New York’s Times Square and a documentary exploring the benefits and dangers of Artificial Intelligence, A.I., commissioned for the World Science Festival. Her debut narrative short-film, LONG AGO, screened globally at more than 50 film festivals and won a screenwriting grant from the Academy of Motion Pictures, Arts and Sciences. It tells the story of overcoming heartbreak, gender discrimination and superficial judgement, with a comedic twist. She also produced the feature documentary, THE DARK SIDE OF THE SUN for Discovery, which was narrated by Grammy-winning artist Sting and directed by twice Oscar-nominated filmmaker Nathaniel Kahn. Wegener has a background in civil rights and journalism, working in the non-profit sector on issues such as gender and racial discrimination in police departments. She previously worked as a director/producer for the BBC and Monocle in London. She graduated from the University of Southern California, holding a Masters degree in Screenwriting and a Bachelor’s degree in Sociology/Journalism. For more go to: conduit-films.com

“A lot of pain is shown in I Am Vanessa Guillen, but there is some encouraging progress shown by the end.” – John Sooja, Common Sense Media

“It’s not a perfectly made documentary, but it’s important… The content was great, and it’s very worth seeing for that.” – Claudia Puig, FilmWeek (KPCC – NPR Los Angeles)