ICAHN: THE RESTLESS BILLIONAIRE, explores the fascinating contradictions at 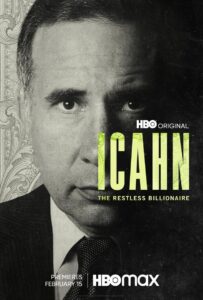 the heart of the famed financier, Carl Icahn. Amassing close to $20 billion dollars over the last half century and at the forefront of some of the most legendary business deals of our times, Icahn, often referred to as the “Lone Wolf of Wall Street,” is a feared negotiator and master strategist in the art of corporate takeovers

and investments. A polarizing figure described as both an activist investor and a ruthless corporate raider, Icahn rose from modest beginnings in Queens to become one of the richest men in the world, embodying the American Dream, whose impact on companies, products, CEOs, stock markets, and capitalism itself is vast. Yet, he openly criticizes corporate excess and the huge wealth inequality gap. In his own words and with commentary from family members, journalists, and fellow titans of industry, ICAHN: THE

Worst Thing That Ever Could Have Happened) joins us for a conversation on how one of America’s highest profile capitalist was shaped by the complex relationship he had with his parents, anti-semitism, and how his poker playing skills helped inform the way he approached the high stakes world of corporate mergers, acquisitions, takeovers, and buyouts on his way to becoming an icon of American business.

For updates and screenings go to: hbo.com/icahn-the-restless-billionaire

About the filmmaker – As the President & Executive Producer of Atlas Media Corp, Bruce David Klein has been a recognized pioneer, industry leader, and creative force behind hundreds of hours of high-profile, award-winning unscripted series, specials and theatrical documentaries. He has created, written, directed, produced and/or executive-produced series and specials such as Hotel Impossible (Travel),  Dr. G: Medical Examiner (Discovery Health / TLC), Playing With Fire (E!), Epic Win (MTV), Stalked: Someone’s Watching (ID),  The Mind Of A Murderer (ID),  Behind The Bash with Giada De Laurentiis (Food), Breaking Vegas (History), Brainwashed (Discovery Channel), and It Can Happen Tomorrow  (Weather). He wrote & directed the TV movie Who Killed Chandra Levy? (TLC) and the theatrical documentary, Meat Loaf: In Search Of Paradise. Most recently, he produced the acclaimed theatrical documentary Best Worst Thing That Ever Could Have Happened with Stephen Sondheim, Hal Prince, Jason Alexander (named “Top 10 Films of 2016” by NY Times, Newsweek, etc) which premiered to raves at the New York Film Festival before its national theatrical run and Netflix premiere. Klein has moderated and appeared on numerous panels for organizations such as NATPE, Realscreen, the Producers Guild, and NYU Film School and his work has been featured and reviewed in publications such as theNew York Times, Variety, Crain’s NY Business, and Entertainment Weekly. Klein is a member of the Academy of Television Arts & Sciences, and serves on the Executive Committees of the National Association of Television Program Executives (NATPE) and the Nonfiction Producers Association (NPACT). To find out more go to: atlasmedia.tv/home

“The octogenarian Icahn anchors this deft pocket biography, with his appealing directness and dead-level stare, as he presides at the office and around the house.” – Nicolas Rapold, New York Times