As the world searches for a cure to a disastrous virus, a scientist (Joel Fry) and 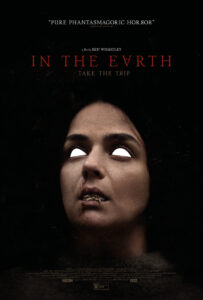 park scout (Ellora Torchia) venture deep in the forest for a routine equipment run. Through the night, their journey becomes a terrifying voyage through the heart of darkness, the forest coming to life around them as nature becomes a force of evil,

Director, writer and editor Ben Wheatley (Down Terrace, Kill List, Fields of England) joins us for a conversation on his endlessly compelling pandemic folk tale that is begins with a walk in the woods that drops us into subversively horrifying landscape of screeching trees and bone-crushing vibrations. Golden Globe nominee composer Clint Mansell (The Fountain, Requiem for a Dream, Moon) provides a stunningly propulsive soundtrack to the film.

For news and updates go to: neonrated.com

“The biggest success, however, is the balance of psychedelic mysticism and heady science that are melded with toe-curling scenes of gore and suspense.” – Norman Gidney, Film Threat

“Wheatley is firing on all cylinders with his stripped-down approach to massive topics. An assault on the senses that’s bigger than any blockbuster.” – Kyle Anderson, Nerdist

“In the Earth reminds us that there’s so much more still to fear in the invisible darkness of the natural world — things that our little animal brains can barely grok in all of its terrible splendor.” – Nick Johnston, Vanyaland

“It’s one of the most exciting genre mashups I’ve seen in years.” – Lorry Kikta, Film Threat

“Wheatley and his collaborators have produced something that some of us thought would be impossible: an outrageously entertaining film that feels utterly rooted in the bleak era in which it was made.” – Robbie Collin, Daily Telegraph (UK)

“This is the work of someone who’s always been more in his element when making something out of nothing, and that energy is especially well-served to a story about the fundamental human impulse to do the same.” – David Ehrlich, indieWire