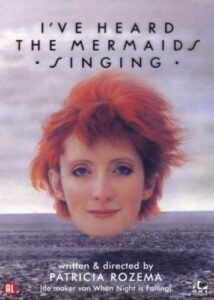 daydreamer with artistic aspirations, Patricia Rozema’s fanciful character study follows an amateur photographer Polly (Sheila McCarthy) as she lands a temp job at a Toronto art gallery run by elegant and sophisticated Gabrielle (Paule Baillargeon), who is also a painter.  Polly is impressed with Gabrielle’s paintings, but as Polly gets to know

Gabrielle’s lover, Mary (Ann-Marie MacDonald), and becomes entangled in their lives, she realizes that Gabrielle isn’t exactly who she appears to be. The absent-minded temp with spiky orange hair and the polished curator with a gift for gab are like night and day, yet a strong connection builds

between these two women through their shared love of art, and their genuine curiosity and need for love. Winner of the Prix de la Jeunesse at the 1987 Cannes Film Festival and went on to win numerous awards, I’VE HEARD THE MERMAIDS SINGING was ranked in TIFF’s list of Top 10 Canadian Films of all time. Director, producer and writer Patricia Rozema stops by to talk about why I’ve Heard the Mermaids Singing was such a a groundbreaking film in 1987, the casting of the pitch-perfect Sheila McCarthy in the title role of Polly, her own career post-Mermaids and the re-release of the film by the prestigious film distributor Kino Lorber.

For news and updates go to: kinolorber.com/ive-heard-the-mermaids-singing

I’VE HEARD THE MERMAIDS SINGING, will opens at Metrograph in New York City on March 11, and at Alamo Drafthouse in Los Angeles on March 18th. Expanding to select cities nationwide in Spring 2022.

About the filmmaker – Director, producer, writer Patricia Rozema was born in Kingston, ON and raised in the small town of Sarnia, Ontario in a Dutch Calvinist immigrant family where television was severely restricted. Rozema didn’t go to a movie theater until she was 16 years old. After a brief stint in television journalism, her first feature, I’ve Heard the Mermaids Singing, a magical realist film about a socially inept secretary in an art gallery, made one of the most outstanding feature debuts in the history of Canadian cinema. At the 1987 Cannes Film Festival, in the Director’s Fortnight, I’ve Heard the Mermaids Singing won the Prix de la Jeunesse and was runner-up for the Camera D’Or (best first feature). The film opened the Toronto International Film Festival and ranked in TIFF’s list of Top 10 Canadian Films of all time.Rozema directed Six Gestures as part of the Yo-Yo Ma Inspired by Bach series.In 1995, she wrote and directed an interracial lesbian love story, When Night is Falling. Her next films were made outside of Canada. Rozema’s elegant progressive adaptation of Mansfield Park (1999, UK, Miramax) with Harold Pinter, Jonny Lee Miller, Frances O’Conner, Alessandro Nivola, Lindsay Duncan, and Embeth Davitz included the then controversial inclusion of a sub-plot critiquing Western colonialism and how slavery was “paying for this tea party.” Her socially conscious children’s film which predicted the US economic collapse, Kit Kittredge: An American Girl (2008) starred Abigail Breslin, Stanley Tucci, Julia Ormond, Chris O’Donnell, Joan Cusack, Wallace Shawn, Glenn Hedley, and Jane Krakowski.In 2000, Rozema was invited to direct Happy Days (2000), part of an Irish production filming all of Samuel Beckett’s plays which included Anthony Minghella, Neil Jordan, and David Mamet. In 2009, Rozema co-wrote Grey Gardens for HBO starring Drew Barrymore and Jessica Lange. She received an Emmy nomination, a Writer’s Guild nomination, and a PEN USA award.  In 2016, Rozema adapted and directed the feature film Into the Forest with Elliot Page and Evan Rachel Wood, Max Minghella, a deeply unnerving post-apocalyptic story about two sisters surviving in the forest when all power has gone out for reasons unknown.Rozema’s feature, Mouthpiece (2018), was adapted from a play of the same name by Amy Nostbakken and Norah Sadava.Most recently, she has directed the pilot for Netflix’s hit series Sex/Life. Rozema holds an honorary doctorate from the Ontario Academy of Art & Design University. She is a member of the Academy of Motion Picture Arts and Sciences.

“[Rozema] uses a seemingly simple style to make some quiet and deep observations… [McCarthy] has one of those faces that speaks volumes, and she is able to be sad without being depressing, funny without being a clown.” – Roger Ebert, Chicago Sun-Times

“Gracefully directed. Alternately whimsical and heartbreaking, with a generous dose of fantasy. Shows an artist very much in tune with her voice.” – The Flick Chick

“Anyone who has ever yearned to break out the mold of a restricted life will find I’ve Heard the Mermaids Singing an enchanting and poetic epiphany. Bravo!” – Frederic and Mary Ann Brussat, Spirituality and Practice