What started out as an inside joke amongst two self-proclaimed weirdos in Ft. 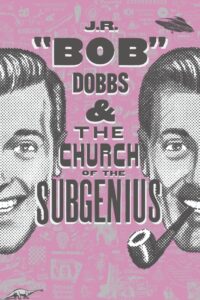 Worth, Texas soon becomes much more than they bargained for when they decide to turn their conservative southern ideology on its head and invent a new religion all their own and all is chronicled in the

rousing new documentary, J.R. “Bob” Dobbs and the Church of the SubGenius. The film features appearances from Church devotees Richard Linklater, Penn Jillette and Nick Offerman. The Church of the SubGenius has been called “the most aggressively preposterous theology the world has ever known!” But what is the Church? And who is J.R. “Bob” Dobbs? And why is his name always in quotes? Filmmaker Sandy K. Boone explores the underground movement that has

galvanized the imaginative, the artistic, the nerdy, even the deranged – to examine the simmering dystopia in their culture, and do absolutely nothing about it… except, maybe, poke fun at it all. Director Sandy K. Boone and co-founder Dr. Philo Drummond (Reverend Ivan Stang) join us for a lively conversation on how the Church’s subversive and deliberately chaotic anti-dogma was unleashed on an unsuspecting world of pinks and normals.

For news, updates and screenings go to: subgeniusmovie.com

For more about J.R. “Bob” Dobbs and the Church go to: subgenius.com

Director Statement – My late husband, filmmaker David Boone, and I moved to Austin in the early 1980s to join the film department at the University of Texas, write scripts, make films and raise our family. The Austin Chronicle was a new venture back then and the original TEXAS CHAIN SAW MASSACRE was just being filmed. Austin was being called The Third Coast by longtime friends: directors Jonathan Demme and John Sayles, and singer-songwriter David Byrne of the Talking Heads.In fact it was David’s film INVASION OF THE ALUMINUM which first caught the attention of Jonathan Demme, who went on the present it and five other Austin films at the Collective for Living Cinema in 1981 in New York. Three decades later, INVASION had become a Texas cult classic and I proudly produced a restoration of the film as part of JONATHAN DEMME PRESENTS: MADE IN TEXAS – SIX FILMS FROM AUSTIN, which premiered at SXSW in 2015. At that screening, Richard Linklater shared that seeing the MIT films years earlier at an art gallery screening in Houston actually inspired his move to Austin. In recent years I have co-founded several Austin based film companies with a shared mission to encourage local indie filmmakers, foster creative talent, and perpetuate a sense of community through filmmaking. Diving deeper into the world of film, I served as an associate producer on RICHARD LINKLATER – DREAM IS DESTINY, which premiered at Sundance in 2016. I then went on to executive produce films such as Ethan Hawke’s BLAZE, Karen Skloss’ THE HONOR FARM, and Keith Maitland’s Emmy winning documentary, TOWER. Currently I’ve just wrapped directing and producing my first feature documentary, J.R. “BOB” DOBBS AND THE CHURCH OF THE SUBGENIUS, a look inside the Church of the SubGenius, of which my late husband was an early disciple.

“Boone gives us both a nostalgic account on this underground movement and how their sci-fi inspired dystopia applies to each decade of history, up till today, where the documentary earns its whole-hearted earnestness.” – Alex Lines,Film Inquiry

“J.R. “Bob” Dobbs and the Church of the SubGenius captures a period in history when rebelling against the boundaries of reality could still be a positively charged, life-altering experience.” – Cheryl Eddy, io9.com

“A wild, an engrossing look at a fascinating sliver of off-the-wall Americana, a minor religious movement that just sort of happened while two friends were messing around.” – Brent McKnight, The Last Thing I See