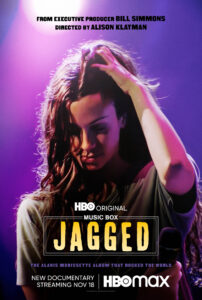 takes viewers back to 1995, when a 21-year-old Alanis Morissette burst onto the music scene with the first single off her ground-breaking album, “Jagged Little Pill.” With a rawness and emotional honesty that resonated with millions, and despite a commercial landscape that preferred its rock stars to be male, she took radio and MTV by storm and the album went on to sell 33 million copies. Featuring an in-depth interview with Alanis, as well as never-before-seen archival material, JAGGED explores her beginings as a young Canadian pop

star, the rocky path she faced navigating the male- dominated music industry, and the glass ceiling she shattered on her journey to becoming the international icon and empowered artist she is today.

Director Alison Klayman joins us for a conversation on the seismic impact that “Jagged Little Pill” had on becoming an international icon, the perceptions around women in music, the music industry, radio, her early career in the “business” and her continuing determination to stay true to herself.

Watch Season One of Music Box at hbo.com/music-box

For news and updates go to: alisonklayman.com

About the filmmaker – Alison Klayman was the youngest director named by the New York Times chief film critics A.O. Scott and Manohla Dargis on their international list of 20 Directors to Watch. Her debut feature AI WEIWEI: NEVER SORRY, about the Chinese artist and activist Ai Weiwei, premiered at the 2012 Sundance Film Festival where it was awarded a US Documentary Special Jury Prize for Spirit of Defiance. It had its international premiere at Berlinale and went on to be shortlisted for an Academy Award, nominated for two Emmys, and earn Alison a DGA Award nomination. In the THE BRINK she takes on former White House chief strategist Steve Bannon, following him for over a year as he tries to promote his brand of extreme nationalism and unite the far-right anti-immigrant parties of Europe. Alison’s other films include FLOWER PUNK about the visionary Japanese botanical artist Azuma Makoto, released in 2020 by The New Yorker; the Emmy and BAFTA-nominated Netflix Original feature documentary TAKE YOUR PILLS about the role of prescription stimulants in a hyper-competitive, overly medicated America (SXSW 2018); THE 100 YEARS SHOW about 103-year-old Cuban-American painter Carmen Herrera, who worked in obscurity for decades until finally receiving recognition late in life. She has also served as an executive producer on several award-winning films, including the Oscar-shortlisted documentaries HOOLIGAN SPARROW and ON HER SHOULDERS.Alison got her start in radio journalism and has contributed radio commentaries for NPR’s “All Things Considered.” Her short form work includes directing for an episodic docuseries EP’ed by Alex Gibney for ESPN, FRONTLINE PBS and multiple installments of the New York Times’ Emmy-winning Op-Doc Video Series. Alison graduated from Brown University in 2006 with an honors B.A. in History, and speaks Mandarin Chinese and Hebrew. Her mother Anna and father Barry are very proud. She is a member of the DGA and AMPAS, and currently based in Brooklyn.