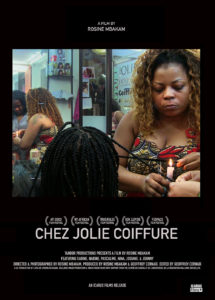 owner, businesswoman Sabine. Recruited by a Lebanese maid agency, Sabine leaves Cameroon and embarks for Lebanon. After many years of servitude, she escapes to Belgium, but her arrival there is complicated by the fact that she enters illegally, by way of Greece and Syria. She settles in Matonge, the African quarter, where she becomes the manager of the beauty salon Chez Jolie Coiffure. Sabine attaches a hair weave and gets to work. Her hands move quickly and precisely, as she tightly braids the hair in front of the sign in her salon promising African, European, and American-style coiffure. Sabine is a larger than-

life personality crammed into a tiny, glassed-in shop in the largely immigrant Brussels district of Matonge. Here, she and her employees fit extensions and glue on lashes while watching soaps, dishing romantic advice, sharing rumors about government programs to legalize migrants, and talking about people back home in West Africa. Patrons, many of them undocumented immigrants, are not only be made to feel beautiful but can also escape the daily difficulties and harsh realities of their lives.

For news, screenings and updates go to: icarusfilms.com/if-chez

“Critic’s Pick! Rosine Mbakam makes a remarkable debut; demonstrates a mastery of perspective, a rare ability to include the camera in community.” —The New York Times

“A must-see! Highly revealing, an atypical and timely portrait of the intersection between the immigrant experience and female identity.” —IndieWire

“An original filmmaker of exquisite sensibility; one of the foremost filmmakers of creative nonfiction working right now.” —The New Yorker

Chez Jolie Coiffure and The Two Faces of a Bamileke Woman are also available at ovid.tv

The Two Faces of a Bamileke Woman 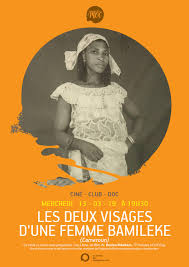 later—having studied film and married a European—she returns to make what she calls a journey into darkness—to the village of her birth, and later to the capital city of Yaoundé, where her mother now lives most of the year. In the village of Tonga, her mother, Mâ Brêh, shares memories of the horrors of the war against French colonizers, and of daily life for a Cameroonian woman in an arranged marriage—a fate Rosine herself barely escaped, leaving the family of an angry ex-fiance behind. As she spends more time with her mother and the women around her, Rosine reveals the strength of their solidarity and their ability to face adversity.

For news, screenings and updates go to: icarusfilms.com/if-bamil

“Critic’s Pick! Mbakam demonstrates a mastery of perspective, a rare ability to include the camera in community.” —Teo Bugbee, The New York Times

“Wrought with bliss and wonder; an exciting contribution to the canon of contemporary African cinema.” —Alexandra M. Thomas, Yale University, in the journal H-Black Europe

“Extraordinary in substance and style. An original filmmaker of exquisite sensibility; one of the foremost filmmakers of creative nonfiction working right now.” —Richard Brody, The New Yorker