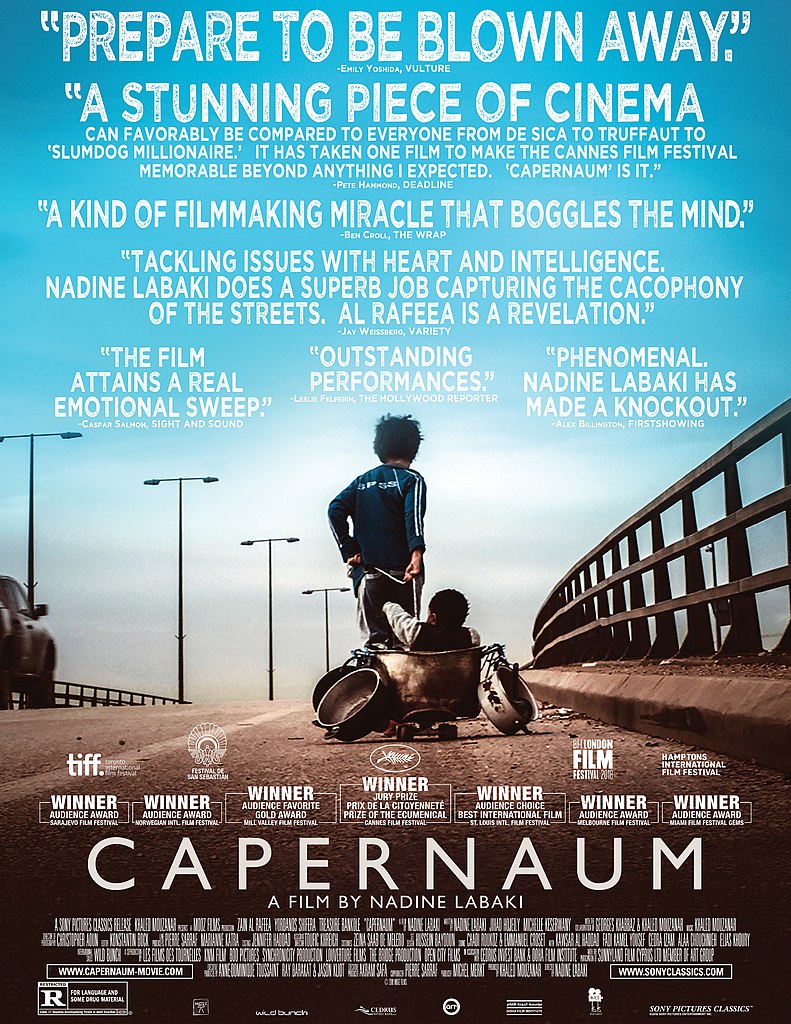 who sues his parents for the “crime” of giving him life. CAPERNAUM follows Zain, a gutsy streetwise child as he flees his negligent parents, survives through his wits on the streets, takes care of Ethiopian refugee Rahil (Yordanos Shiferaw) and her baby son, Yonas (Boluwatife Treasure Bankole), being jailed for a crime, and finally, seeks justice in a courtroom. CAPERNAUM was made with a cast of non-professionals playing characters whose lives closely parallel their own. Following her script, Labaki placed her performers in scenes and asked them to react spontaneously with their own words and gestures.

When the non-actors’s instincts diverged from the written script, Labaki adapted the screenplay to follow them. While steeped in the quiet routines of ordinary people, CAPERNAUM is a film with an expansive palette: without warning it can ignite with emotional intensity, surprise with unexpected tenderness, and inspire with flashes of poetic imagery. Although it is set in the depths of a society’s systematic inhumanity, CAPERNAUM is ultimately a hopeful film that stirs the heart as deeply as it cries out for action. Director and writer Nadine Labaki joins us for a conversation on her impassioned new film and how CAPERNAUM changed her and many of the cast and crew from this multi-award winning film.

For news and updates go to: sonyclassics.com/capernaum

Winner, Prize of the Ecumenical Jury

“It’s a scathing commentary on the effects of poverty, the failure to properly respond to refugee crises, and simple human decency populated by those struggling just as much as the next yet have also crossed a line they cannot return from.” – Jared Mobarak, Film Stage

“It’s a deeply assured piece of direction, and though it only plays a few emotional notes, they are ones that won’t soon leave your memory. Prepare to be blown-away.” – Emily Yoshida, New York Magazine / Vulture

“A social-realist blockbuster – fired by furious compassion and teeming with sorrow, yet strewn with diamond-shards of beauty, wit and hope.” – Robbie Collins, Daily Telegraph

“Can favorably be compared to everyone from De Sica to Truffaut to ‘Slumdog Millionaire.’ A stunning piece of cinema.” – Pete Hammond, Deadline