From Emmy and Peabody winning directors Gédéon and Jules Naudet 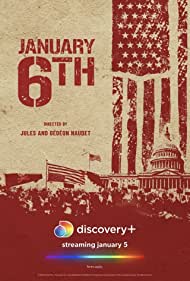 comes an in-depth examination of JANUARY 6TH from the unique perspective of the heroes, first responders, and survivors of the attack. JANUARY 6TH is the complete story of the attack on the Capitol told by those who witnessed the chaos first-hand. The film succeeds in telling the story of this unprecedented moment in history as a human event and without political bias.  In the moments where the worst of humanity is on display, there will always be heroes who step up as shining examples of courage and selflessness in the face of tragedy. Through JANUARY 6TH Naudet brothers reveal countless acts of bravery on display that day, both big and small. It’s an apolitical story of resilience and bravery that features Speaker Nancy Pelosi, the DC Police Chief,

Chief Robert J. Contee III, Congresswoman Liz Cheney,  and over 50 Senators, Representatives, staffers from both sides of the aisle, and police officers as they reveal their first-hand experience of the attack. It is the only documentary for which the Capitol and Metropolitan Police Departments granted full access to their officers. Co-directors Gédéon and Jules Naudet (9/11, November 13: Attack on Paris, The Presidents Gatekeepers) join us for a

conversation on their painstaking efforts to get the story of January 6th told from as many perspectives as possible and to take the viewer from the steps of the Capital to the House and Senate and ending with the men and women who fought to save the citadel of democracy from the seditious mob bent on unraveling our democracy.

For more on JANUARY 6th go to: discovery+

About the filmmakers – Gedeon and Jules Naudet, brothers and filmmakers, shot, produced and directed the iconic documentary 9/11, which has been compared, for its historical significance, to the Zapruder film of the JFK’s assassination. Airing on CBS and in 137 countries, 9/11 won every honor in television, including Emmy, Peabody and DuPont awards. Jules and Gedeon produced and directed for CBS In God’s Name: a revealing and intimate look at the world’s great religious leaders’ doubts, beliefs and hopes for human kind. In 2013, the Naudets produced and directed The Presidents’ Gatekeepers for Discovery Channel, a riveting account of five decades of presidential history seen through the eyes of all twenty living White House chiefs of staff. Most recently, the Naudets produced and directed the critically acclaimed Showtime film The Spymasters: CIA in the Crosshairs, which tells the story of the CIA during one of the most controversial periods in its history. All twelve living CIA directors along with their top operatives were interviewed.

“This documentary is insightful and educational, adding important commentary to an edited chain of video that really should but somehow doesn’t speak for itself.” – Abe Friedtanzer, AwardsWatch

” … an unparalleled level of access gives audiences a view that’s as up-close and personal as they can get.” – Larry Fried, That Shelf