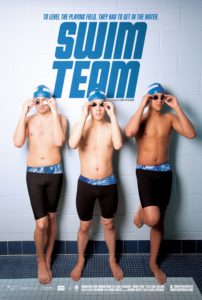 SWIM TEAM is a feature documentary chronicling the rise of a competitive swim team made up of diverse teens on the autism spectrum. Based in Perth Amboy, New Jersey, the cast of SWIM TEAM is largely Latino and Asian, minorities that are underrepresented in competitive swimming and underserved in autism intervention and education. SWIM TEAM follows three of the team’s star athletes, boys on the cusp of adulthood as they face a future of exclusion and dependence. But everything changes when they come together as a team with parent coaches who train them with high expectations and zero pity. As the team vies for state and national Special Olympics championships, SWIM TEAM captures a moving quest for inclusion, independence  and a life that feels winning. Director Lara Stolman joins us for to talk about the struggles and triumphs of Mikey, Kelvin and Robbie and the people who love them.

For news and updates go to: swimteamthefilm.com

“The breaststroking, freestyling young athletes in “Swim Team” couldn’t be more different in terms of personality, drive, appeal and, of course, developmental challenges, and it gives this film from Lara Stolman its particular character, heart and verve.” – Robert Abele, Los Angeles Times

“Swim Team is long enough to break and warm your heart in equal measure – which is about what you’d expect from a documentary about teenagers with autism who are training to compete in the Special Olympics.” – Ella Taylor, NPR

“This isn’t “just” a film about special needs. It’s about special kids – and the very special adults who advocate for them.” – Stephen Whitty, Newark Star-Ledger

“Well paced and well produced, Swim Team is engaging throughout and would be easy to enjoy as light viewing, but there’s more going on beneath the surface.” – Jennie Kermode, Eye for Film