Scotty and the Secret History of Hollywood  is the deliciously scandalous story of Scotty Bowers, a handsome ex-Marine who landed in Hollywood after World 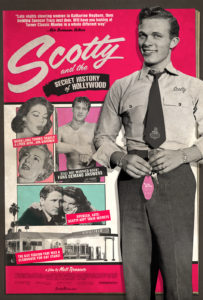 War II and became confidante, aide de camp and lover to many of Hollywood’s greatest male — and female — stars. In the 1940s and ’50s, Scotty ran a gas station in the shadow of the studio lots where he would connect his friends with actors and actresses who had to hide their true sexual identities for fear of police raids at gay bars, societal shunning and career suicide. An unsung Hollywood legend, Bowers would cater to the sexual appetites of celebrities – straight and gay – for decades. In 2012, he finally spilled his secrets in the New York Times bestselling memoir “Full Service,” which revealed a dramatic, pre-Stonewall alternate

history of Hollywood. While the studio PR machine were promoting their stars as wholesome and monogamous, Bowers was fulfilling the true desires of many of them. This cinema-vérité documentary tells his story, as well as presents eye-opening takes on icons from the Hollywood Golden Age including Cary Grant, Katharine Hepburn, Spencer Tracy, Lana Turner, Ava Gardner and many more. Director Matt Tyrnauer (Studio 54, Citizen Jane: Battle for the City, Valentino: The Last Emperor) joins us for spirited conversation on the days when the Hollywood PR machine mattered more than the lives of the artist who made it successful and the role Scotty Bowers played in breaking that stranglehold on them.

For news and updates go to: scottymovie.com

“Scotty” rolls out across the country beginning August 3, find theatres near you.

“Scotty” is more than just a portrait of the man, also serving as a history lesson on how the film industry once tried to project a repressive, clean-cut image to satisfy moral watchdogs” – Tim Grierson, Screen International

“A nicely filled-out look at different eras, one secrecy-ridden and dedicated to the preservation of illusion, the other wide open and blasé about personal predilections.” – Todd McCarthy, Hollywood Reporter

“There’s plenty of gossip to be found here, but there’s also no shortage of humanity.” – Alonso Duralde, The Wrap

“The present-day footage is more compelling than any of the gossipy bits, which turn out to be the hook that pulls the film into more fraught and complex directions.” – Kevin Ritchie, NOW Toronto

“’Scotty and the Secret History’ is a fascinating portrait that neither lionizes nor judges its subject. It merely lets you take him for what he is.” – Jason Bailey, Flavorwire