Praised by The Village Voice as the most “clear-eyed account of union organizing on film,” 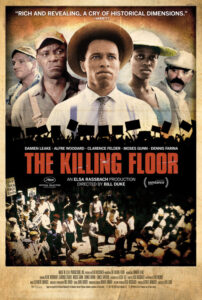 THE KILLING FLOOR tells a true story of how a group of black and white slaughterhouse workers attempted to break race barriers to build an interracial union for the first time in the brutal stockyards. Damien Leake (SERPICO, APOCALYPSE NOW) stars as Frank Custer, a young black sharecropper from Mississippi – one of tens of thousands of southern blacks who journeyed to the industrial north during World War One, hoping for more racial equality. When Frank lands a job as a laborer on “the killing floor” in one of Chicago’s giant meatpacking plants., he finds 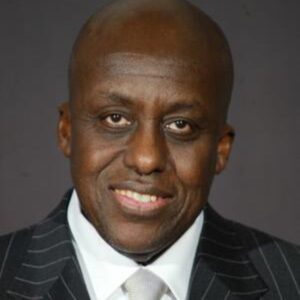 a place seething with racial antagonism and decides to support the union cause. His best friends from the South, distrustful of the white-led union, turn against him. As racial violence explodes in the notorious Chicago Race Riot of 1919, management is able to further divide the workforce to defeat the union, and Frank must forge a new path. Director Bill Duke ( A RAGE IN HARLEM, DEEP COVER) stops by to talk about the challenges of making a sweeping historical film on a PBS budget, bringing together a talent group of mostly unknown African-American actor and the joy of seeing his groundbreaking and newly relevant film restored and revisited.

For news and updates go to: filmmovement.com/the-killing-floor

About The Killing Floor: The film was shot in 1983 in Chicago, working with local union crews and with many talented Chicago actors. It was made in the midst of the Reagan Era and shortly after the election of Chicago’s first African-American mayor, Harold Washington. Funded by the National Endowment for the Humanities, foundations, corporations and dozens of national and local unions, THE KILLING FLOOR premiered on PBS’ American Playhouse series in 1984 to rave reviews. In 1985 the film was invited to Cannes and won the Sundance Film Festival Special Jury Award. Featuring a screenplay by Obie Award-winner Leslie Lee, based on an original story by producer Elsa Rassbach and directed by Bill Duke (A RAGE IN HARLEM, DEEP COVER), THE KILLING FLOOR. New 4K restoration. Preserved by UCLA Film & Television Archive, laboratory services and DCP by UCLA Film & Television Archive Digital Media Lab, with a special thanks to Elsa Rassbach, Sundance Institute Collection at UCLA Film & Television Archive.

“Rich and revealing, a cry of historical dimensions….” — Variety

“A classic study in class hate, greed and stubborn idealism.  You won´t forget it.” — Newsday

“Brilliantly captures the drama of the moment as well as the historical forces that produced it.” — The Journal of American History

“…a particularly brilliant example of a cinema which knows how to use all the resources of fiction, without ever allowing its historical documentary side to be marred.” – La Revue du Cinema

“As compelling dramatically as its historical analysis is fascinating …Surprising that a film from the U.S. can be so frank and explicit in its exposure of the class struggle.” — Sight & Sound