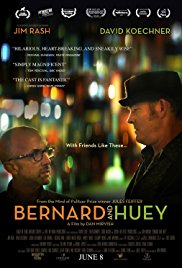 mojo back and tries to seduce the various women in Bernard’s life, including his off-again girlfriend Roz (Sasha Alexander, RIZZOLI & ISLES) and colleague, Mona (Nancy Travis, SO I MARRIED AN AXE MURDERER), while reconnecting with his ex-wife  (Bellamy Young, SCANDAL) and brother (Richard Kind, ARGO).  As Bernard and Huey return to their old ways, at least one of them finds himself in danger of marrying a woman old enough to be his wife. An award-winning film that’s screened at over 25 festivals in 5 continents, BERNARD AND HUEY is a particularly timely story of two men behaving badly, and the smart women who rein them in. Director Dan Mirvish joins us for a conversation on getting older, acknowledging that we get older, love, romanced the genius of Jules Feiffer.

For news and updates go to: bernardandhueymovie.com

“Devoted Feifferites, not to mention fans of Mr. Rash and Mr. Koechner, who get to flex their muscles nicely here, will be well sated.” – Glenn Kenny, New York Times

“Mirvish has stylishly blended the past and present for a comfortable vibe that makes the film fun and cool despite the ridiculous relationship chaos swirling around.” – Bradley Gibson, Film Threat

“As you might hope for a film with a script from the great Jules Feiffer, Dan Mirvish’s Bernard and Huey bristles with anxious, circuitous, hilarious talk.” – Alan Scherstuhl, Village Voice