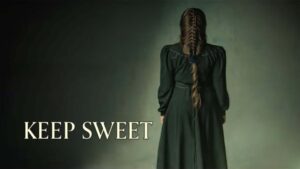 by the self-proclaimed “Prophet of the FLDS”, Warren Jeffs and how Jeffs’ demands for absolute loyalty, and the complete adherence to religion dogma, requiring strict dress codes, banishing community celebrations and casting out followers who didn’t fall in line irreparably damaged the lives of so many. His controversial reign ended with a conviction for sexual assault with underage girls, landing him in jail for life. Jeffs’ downfall sent shock waves throughout the community, with some continuing to pledge

their loyalty to him, while others turned their backs on Jeff’s and the FLDS religion altogether. Ten years after his arrest, those left behind attempt to rebuild their community. KEEP SWEET is an allegory for the unsettling

reality we are living through in America. Can we learn how to live with one another despite our different ideologies, or are we destined to live apart? Director Don Argott (Art of the Steal, Kurt Vonnegut: Unstuck in Time) joins us for a conversation on his own perception of the FLDS people living in Colorado City, Arizona, Warren Jeffs pernicious impact on the lives of people who trusted him and lengths that people will go to for their beliefs.

For news and updates go to: 914pictures.com

For other resources go to: 44blue.com

About the filmmaker – Don Argott (born September 14, 1972) is an American documentary filmmaker and musician originally from Pequannock, New Jersey, and currently residing in Philadelphia, Pennsylvania. Argott has directed the documentary films Rock School (2005), Two Days in April (2007), and The Art of the Steal (2009), Last Days Here (2011), The Atomic States of America (2012), Batman and Bill (2017), Believer (2018), Framing John DeLorean (2019), and Kurt Vonnegut: Unstuck in Time (2021), Argott has also worked as a producer and cinematographer.  He co-owns the production company 9.14 Pictures with producer Sheena M. Joyce. Argott has worked with film score in a rock band format, releasing original music under the name Pornosonic. Pornosonic’s work has been featured in numerous films, including Old School.  Argott currently plays guitar in the proto-metal band Serpent Throne along with 9.14 Pictures editor Demian Fenton. For news and updates go to: 914pictures.com or 44blue.com