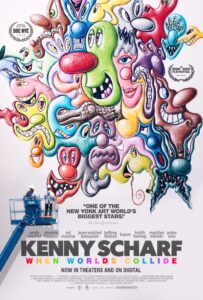 you can’t help but wonder where he gets his inspiration. This documentary about Scharf’s fascinating life—made over 11 years by the artist’s daughter, Malia Scharf, and Max Basch—answers that question. This fascinating documentary shows Scharf’s New York City arrival in the early 1980s where he quickly befriended Keith Haring and Jean-Michel Basquiat.  This trio, amongst the fervent creative bustle of a depressed downtown scene, would soon take the art world by storm.  Featuring interviews and rare archival footage with the artist himself along with Andy Warhol, Jean-Michel Basquiat, Keith Haring, Ed Ruscha, Dennis Hopper and Yoko Ono, the film shows Scharf’s arrival in New York City in the early 1980s, where

he quickly befriended Keith Haring and Jean Michel Basquiat. There, amongst the fervent creative bustle of a depressed downtown scene, the trio would soon take the art world by storm. But unlike Haring and Basquiat, who both died tragically young, Scharf lived through cataclysmic shifts in the East Village as

well as the ravages of AIDS and economic depression. Decades later, still obsessed with garbage, cartoons and plastic, and committed to the idea that art should be fun, Scharf’s whimsical mind continues to generate works rife with iconic images and bizarre forms. Co-directors Malia Scharf and Max Basch join us for a conversation on the New York City in the 1980s, why so many artists from multiple disciplines seized the opportunity to make art amidst the rumble of the Downtown, and the re-evaluation of Kenny Scharf’s prodigious technicolor artistic vision.

For news and updates go to:kennyscharfmovie.com

“A compelling and informative introduction to the life and work of Kenny Scharf. His perseverance, passion for art as well as for his inner child are very palpable.” – Avi Offer, NYC Movie Guru

“I found it heart warming and endearing, especially because of his daughter’s direction of the film. If you are interested in the art of this period, I think you will love this documentary.” – Katrina Olson, katrinaolson.ca

:This is the harrowing, heartbreaking, ultimately affirming story of Kenny Scharf, and I urge you to see it.: – Norman Gidney, Film Threat

“Playfully deconstructs the life and times of a creator who tries to balance their childlike playfulness with the adult responsibilities of the real world.” – Andrew Parker, The Gate