Narrated by Woody Harrelson and directed by critically-acclaimed filmmakers 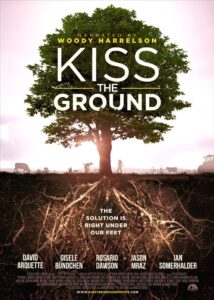 Joshua Tickell and Rebecca Harrell Tickell (Oscar® shortlisted film and Sundance Audience Award winner “Fuel,” Cannes Film Festival Official Selection “The Big Fix”), KISS THE GROUND unveils a game-changer: We can reverse global warming and the Earth’s soil is the solution. By regenerating earth, we can completely and rapidly stabilize our planet’s climate, restore lost ecosystems, and create abundant food supplies.With epic footage shot on five continents, striking visuals from NASA and NOAA, and stunning animation, KISS THE GROUND conveys this critical message through the voices of leading scientists, ecologists, and experts including Nobel Laureates in 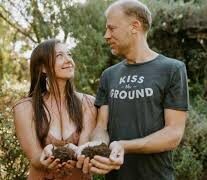 climate, members of the International Panel on Climate Change, top scientists at the National Oceanic and Atmospheric Association (NOAA), as well as environmental activists such as Gisele

Bundchen, Tom Brady, Jason Mraz, Ian Somerhalder, Patricia Arquette, and Rosario Dawson. As an urgent call to action in addressing the world’s climate crisis, KISS THE GROUND artfully illustrates an accessible, relatively simple solution to humanity’s greatest challenge. Co-directors Josh and Rebecca Tickell join us to talk about how, despite all of the dire news about the impact of climate change, there is a way forward that is basic, sustainable, scalable and immediate, regeneration of earth’s most plentiful resources, soil.

For news, screening and updates go to: kissthegroundmovie.com

To find out more about the movement go to: kisstheground.com

“Climate Change is definitely real and this doc proves it while encouraging and teaching the human race how we can save the earth and save ourselves. Should be watched by every living human being!” – Carla Renata, The Curvy Film Critic

“The argument that they make is inspiring and thorough.” – Wade Major, FilmWeek (KPCC – NPR Los Angeles)