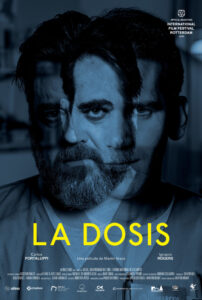 morally ambiguous life of Marcos (Carlos Portaluppi), an experienced nurse, who works the night shift of a private clinic. He is successful and professional, though it is soon revealed that he uses his position to help suffering patients find early peace. A new nurse in the clinic, Gabriel (Ignacio Rogers), shakes the sector: he is young, intelligent, beautiful, and 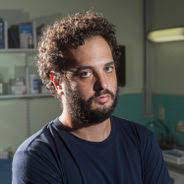 seduces everyone. He soon deciphers Marcos’ secret and the clinic becomes a battle of wits and seduction. Marcos retracts until he discovers that Gabriel also dabbles in euthanasia, though for different reasons. This revelation forces him to confront Gabriel and Marcos knows that only by exposing his own true identity will he be able to stop him. Director Martin Kraut stops by to talk about his slow-burn deadly game of cat and mouse thriller, the story’s moral ambiguity and his collaboration with the gifted lead actors Ignacio Rogers and Carlos Portuppi.

For news and updates go to: samuelgoldwynfilms.com/la-dosis

LA DOSIS, the sharp slow-burn thriller from distributor Samuel Goldwyn Films, will be released on-demand and digital on June 11, 2021. The film world premiered at the Rotterdam Film Festival in 2020, and also played BFI Flare, the Fantasia Film Festival, and others.

Director’s Statement – Back in 2012 I read a news story on two nurses in Uruguay who had euthanized multiple patients, and almost right away I felt it was the plot for a movie. I followed the case with interest as I worked on multiple versions of a script that was increasingly drifting from what had allegedly happened. “La dosis” captures the essence of this conflict, the discussions it generated and the issues that surfaced with an entirely free approach. On the other hand, I am interested in investigating what happens when doctors and nurses know there is no chance of survival yet they must keep the bodies alive while they can: Keeping patients on life support or alive is also a very important and profitable business. This fact coupled with the immense power that some nurses like Marcos have while working the night shift, and who devote their time to the care of others in those conditions, can lead them to extreme situations. The film addresses, in as much detail as possible, the story of a nurse in the midst of an internal struggle. Day after day, year after year, and decade after decade, he has cared for hundreds of patients who were fighting for their lives, many of whom lost their battles. Sometimes the patients and their families find themselves in a modern yet perverse labyrinth that forces them to make very difficult decisions. The lead actor’s feelings in the face of the hiring of a new young nurse are also of interest to me as a narrative trigger. The known vs. the unknown, the ensuing competitiveness and the changes brought about in environments used to specific habits are also issues explored in the movie. The strange and complex reality that we have to live in today amid COVID-19 definitely gives the movie another meaning, for it revolves around the dynamics inside an intensive care unit (ICU). Involuntarily, the movie brings our worst nightmares to the forefront as healthcare professionals, who must provide care for us, end up committing illegal acts. – Martin Kraut

About the filmmaker – Martin Kraut is a director, screenwriter and photographer born in Buenos Aires (Argentina) in 1982. He graduated from Colegio Nacional de Buenos Aires and studied Film Studies at the Universidad del Cine. Kraut took screenwriting classes from Mauricio Kartún and Pablo Solarz, among others. His first short film “Que Miren” screened and was recognized in several festivals. Kraut’s photography exhibition “Centros Clandestinos de Detención Hoy” (Today’s Clandestine Detention Centers) was shown in multiple places in Argentina. He also participated in other solo and group exhibitions. Since 2015, he has worked as a photographer and audiovisual producer at Revista Anfibia. His debut feature “La dosis” premiered at the 2020 The International Film Festival Rotterdam (IFFR). He has participated in the Bucheon International Film Festival in Korea (BIFAN), the Fantasia International Film Festival in Canada and his work will soon be featured at the Taoyuan Film Festival in Taiwan and the USA.

“It emerges as a valuable film that takes us from the most pure realism to the most disturbing extremes of psychological terror.” – Diego Batlle, Otroscines.com

“It’s a film about threatened masculinity, the ethics of euthanasia, the tension between relevance and irrelevance, all played out with a decidedly subtle hand.” – Clint Worthington, The Spool

“Martin Kraut captures realistic tremors of physical tension among the characters, and much of the film’s first half is a captivating, slow-burn study of the protagonist in his setting.” – Chuck Bowen, Slant Magazine

?… doesn’t pass judgment on either of its main characters as they match wits, while the intriguing dynamics ratchet up the tension amid the inherent life-or-death stakes.” – Todd Jorgenson, Cinemalogue