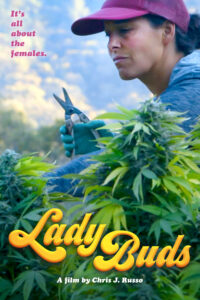 decision to legalize cannabis in California and six courageous women who emerge from the shadows to enter the new commercial industry. As farmers, entrepreneurs and activists, these modern-day pioneers find their initial optimism is quickly replaced with uncertainty and fear as the new legislation favors deep pocketed corporations. Those who shaped the foundations of the cannabis industry for decades soon find themselves struggling to fight for their piece of the American Dream in a market they helped create. LADY BUDS features second-generation cannabis farmer Chiah Rodriques, 72-year old African-American retired Catholic school principal turned dispensary owner Sue Taylor, Latinx queer activist Felicia Carbajal, serial entrepreneur Karyn Wagner, and Humboldt elders The Bud Sisters. Their stories speak to the many opportunities and  issues facing 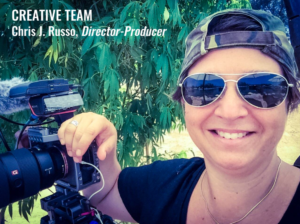 commercial cannabis today: the complicated dynamics of raising a family on a cannabis farm, the ongoing fight for those adversely affected by the War on Drugs, educating seniors citizens about the healing power of cannabis, and honoring the LGBTQ activists who

fought for legalizing medical marijuana over 25 years ago. At every turn these trailblazers defy stereotypes, while revealing that cannabis is much more than a plant, it’s a community. In her feature debut, award-winning filmmaker Chris J. Russo joins us to all about her own insightful journey into the lives and work of the women who are the backbone of the cannabis culture in California. Their struggles and triumphs paint a picture of an industry in flux as it grapples with preserving its storied heritage while looking toward the future.

For news, screenings and updates go to: ladybudsmovie.com

About the filmmaker – Director / Producer / Writer Chris J. Russo’s award-winning short films have screened all over the world, including the Sundance Film Festival, and have been broadcast on Showtime, PBS, IFC, LOGO and NETFLIX. She is a 2018 fellow of the Sundance Institute/Women In Film Financing Intensive with Lady Buds, and is also a fellow of Film Independent’s Director and Screenwriters Labs, with her project, Directed By Dorothy Arzner. Notable short film credits include, A Woman Reported, about the moments before a hate crime occurs; Size ‘em Up, a coming of age story; Straight Down The Aisle: Confessions of Lesbian Bridesmaids, winner of the Outfest Best Short Documentary Award for its poignant view on marriage non-equality (pre-Prop 8); and numerous music videos. After receiving two art degrees in Photography — a BFA from the University of Buffalo and MFA from the Visual Studies Workshop in Rochester, NY — Russo moved to Hollywood and worked for Kodak for 15 years and as a Post Production Supervisor on over 15 feature films. Russo is an exhibited fine art photographer, with recent group shows in Los Angeles, West Hollywood and Beverly Hills. She has dedicated the last four years to producing and directing Lady Buds, her first feature film which had its World Premiere at Hot Docs 2021.

“A broad and insightful overview of the subject, which is explored in considerably more depth than might have been expected from a film which is packed to the gills with high-strength weed.” – Wendy Ide, Screen International

“Lady Buds is the kind of film whose raison d’être isn’t immediately obvious, but whose storytelling is engaging enough that we’re ready for wherever the journey takes us.” – Inkoo Kang, Hollywood Reporter