LAPSIS is a smart, funny, slyly suffocating look into a parallel present, delivery 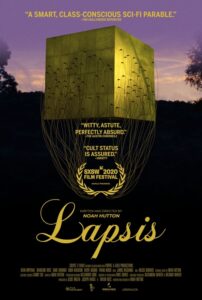 man Ray Tincelli (Dean Imperial) is struggling to support himself and his ailing younger brother. After a series of two-bit hustles and unsuccessful swindles, Ray takes a job in a strange new realm of the gig economy: trekking deep into the forest, pulling cable over miles of terrain to connect large, metal cubes that link together the new quantum trading market. As he gets pulled deeper into the zone, he encounters growing hostility and the threat of robot cablers, 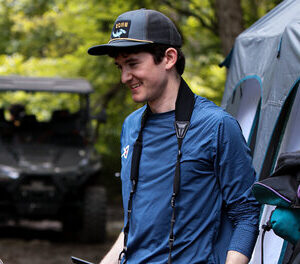 and must choose to either help his fellow workers or to get rich and get out. What he doesn’t expect is to be pulled into a conspiracy involving hostile cablers, corporate greed, and the mysterious LAPSIS who may have previously owned his permit. Director / writer / editor Noah Hutton joins us for a conversation on his unique vision of the near future, quasi-syfy world, relationships, family and cabling.

For news and updates go to: filmmovement.com/lapsis

About the filmmaker – Noah Hutton is a writer and director of documentary and narrative films. He wrote and directed the sci-fi feature Lapsis, which premiered in the narrative feature competition at SXSW 2020 and was acquired by Film Movement for theatrical release in 2021. In 2020 he completed In Silico, a ten-year documentary begun in 2009 and supported by Sandbox Films and the Alfred P. Sloan Foundation about a ten-year project to simulate the human brain on supercomputers. Previously he directed the documentary features Deep Time (SXSW 2015) and Crude Independence (SXSW 2009). For more about Noah Hutton and his films go to: couple3films.com

“Lapsis lives on the central performance by Dean Imperial as Ray, and that life is undoubtedly vibrant and complex.” – Richard Whittaker, Austin Chronicle
“A world away from the clichés of popular science fiction, this is the real thing.” – Jennie Kermode, Eye for Film

“…entertainingly original…. This tale of a floundering gig-economy worker straddles both the bleak present-tense reality of Ken Loach’s “Sorry We Missed You” and the subversive near-future political satire of Boots Riley’s “Sorry to Bother You” while arriving at a whimsical critique all its own.” – Dennis Harvey, Variety