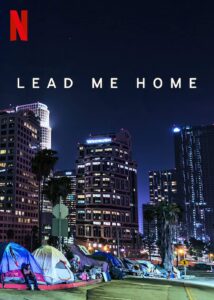 Shenk bring us into the multi-faceted homelessness crisis in the documentary LEAD ME HOME. In this world tents become bedrooms; trucks become washrooms; parks become kitchens, love occurs, as does strife and violence. People make homes for themselves wherever they end up. The pair set out to depict the stories of people living on the street who, were it not for a vast set of unfortunate

circumstances—addiction, mental illness, sexual abuse, homophobia, healthcare costs, disability—would be living no differently from those sleeping comfortably mere blocks or even just floors away. In the shadow of boundless real estate development proliferating in Los Angeles, San Francisco, and Seattle, Kos and Shenk

filmed the daily lives of more than two dozen subjects over three years to provide a slice-of-life portrayal of what  it’s like to experience homelessness in America today.

Conceived as a two-part visual symphony shot in distinct production periods, the film opens a window into a parallel world hiding in plain sight and challenges the audience to feel the scale, scope and diversity of unsheltered America. Lead Me Home marks the first time Emmy winners Pedro Kos and Jon Shenk have co-directed together and is a co-production of Netflix and Actual Films, produced by Bonni Cohen, Serin Marshall and Richard Berge.

For news and updates go to: leadmehomefilm.com

About the filmmaker – Co-Director Pedro Kos’ latest documentary feature film REBEL HEARTS, which he directed, wrote, and edited premiered in the U.S. Documentary Competition at the 2021 Sundance Film Festival and is being released worldwide by Discovery+ in the summer of 2021. Prior to that he wrote and produced Jehane Noujaim and Karim Amer’s Netflix Original Documentary THE GREAT HACK which premiered at the 2019 Sundance Film Festival and was nominated for a BAFTA award. His feature directorial debut BENDING THE ARC (co-directed with Kief Davidson) premiered at the 2017 Sundance Film Festival. Previously, he edited Jehane Noujaim’s Academy Award nominee THE SQUARE which earned Pedro an Emmy Award for Best Editing for a Non-Fiction program, Lucy Walker’s Academy Award nominee WASTE LAND and THE CRASH REEL (2013 SXSW Film Festival Audience Award winner), Jon Shenk’s THE ISLAND PRESIDENT (2011 TIFF Documentary People’s Choice Award winner) among others. Pedro is from Rio de Janeiro, Brazil and received his B.A. in Theater Directing from Yale University.

About the filmmaker – Co-Director Jon Shenk has been directing and shooting documentaries for 25 years. His most recent film, LEAD ME HOME (co-directed with Pedro Kos) tackles the crisis of homelessness in the United States. Prior to that, he photographed and co-directed three films with his partner, Bonni Cohen: ATHLETE A (Netflix), AN INCONVENIENT SEQUEL: TRUTH TO POWER (Participant Media/Paramount), and AUDRIE & DAISY (Netflix). His past films also include THE ISLAND PRESIDENT, LOST BOYS OF SUDAN, BLAME SOMEBODY ELSE, and THE BEGINNING. For his work, Jon has won the Independent Spirit Award, IDA’s Pare Lorentz Award, the Peabody Award, a Grierson Award, a Critics Choice Award, and two Emmy Awards. He served as Director of Photography for the 2008 Academy Award-winning SMILE PINKI.