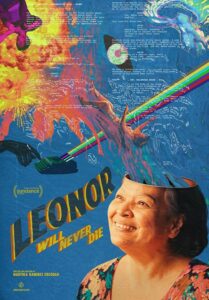 filmmaker who reads the obits and prefers to talk with her dead son Ronwaldo (Anthony Falcon), rather than her living one, Rudie (Bong Cabrera), who is on her case for not paying the electric bill. One day, however, Leonor is hit on the head by a TV that was thrown out a window and ends up in with hypnagogia — a state between sleeping and waking. She soon enters a limbo that is her unfinished screenplay “Ang Pagbabalik Kwago” (“The Return of

Kwango”), a film-within-the-film, in which Ronwaldo (Rocky Salumbides) romances Majestika (Rea Molina) while trying to fend off a series of bad guys. And it is all filmed like a Z-grade action film where the fight scenes are faker than wrestling. But it provides considerable fun as Leonor wanders through the film’s scenes like an absent-minded grandmother wielding a hammer in case of danger.

LEONOR WILL NEVER DIE is an innovative blend of pulpy action homages, playful comedy, touching family drama, and a wonderfully imaginative tribute to the art of filmmaking. Director Martika Ramirez Escobar joins us for a conversation on the joyous and challenging eight year journey that LEONOR has taken her on, the DIY powered collaboration with her creative partners that sustained the film and the satisfaction of seeing the positive reaction to the film.

For more go to: musicboxfilms.com/leonor-will-never-die

About the filmmaker – Martika Ramirez Escobar was born in Manila in 1992. Her love for the bizarre is best reflected through her films and photography. After graduating with honors from the University of the Philippines, her thesis Stone Heart, competed at the 19th Busan International Film Festival and screened around the world. It also won Best Film at Cinemalaya. Her latest work, Quadrilaterals, premiered at the 9th DMZ Docs. She is an alumna of the Berlinale Talents Tokyo, Asian Film Academy, Southeast Asian Film Lab, Luang Prabang Talent Lab, Fantastic Film School, Mowelfund Film Institute and is a recipient of the Purin Film Fund. She is currently working as a freelance director-cinematographer for various production houses in Manila. More from Martika at: vimeo.com/martika

“Disarmingly tender portrait of an artist on the edge of the afterlife.” – A.O. Scott, The New York Times

“A beautiful, life-affirming celebration of the power of film and art.” – Charles Barfield , The Playlist

“A delightful surprise; it’s inventive and original, with flourishes of magical realism.” – Shirley Li, The Atlantic

“An affectionate sendup of cornball heroics. The punches whiff, the sound effects are clumsy, and the score by Alyana Cabral and Pan De Coco is deadpan hysterical. But Escobar is after something deeper than parody.“ – Amy Nicholson, Variety