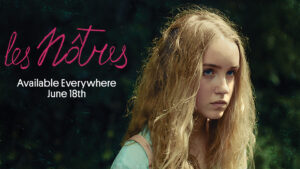 takes us into the heights and depths of the French speaking, tight-knit community of Sainte-Adeline Quebec. Magalie (Émilie Bierre) appears as a normal suburban high school sophomore surrounded by friends. But this popular teenage girl is harboring a shocking secret: she’s pregnant. When

Magalie refuses to identify the father, suspicions among the townsfolk come to a boiling point and the layers of a carefully maintained social varnish eventually crack. Anchored by a host of remarkable performances from a cast that includes Marianne Farley, Judith Baribeau, Paul Doucet, A. Patrice Mareau and the aforementioned Emilie Bierre.  Les Nôtres director and co-screenwriter Jeanne LeBlanc (co-writer Judith Baribeau) masterfully peels back the brittle veneer of respectability and conformity in her subversive tale of class, racism, sexual assault and the community’s bourgeoisie capitulation to the heavy hand of power.

For news and updates go to: lesnotres.oscilloscope.net

“Les nôtres is going to ruffle plenty feathers. Not because of its topic, but because of its willingness to depict characters that will stop at nothing to keep pretending.” – Jared Mobarak, The Film Stage

“Les Nôtres finished on something of an unsatisfactory but realistic note, but such is the story that knows that sadly this is still common in small communities, those that only pretend to have everyone’s best interests at heart.” – Shelagh Rowan-Legg, ScreenAnarchy

“An enraging film astringent enough to peel the paint from the façade of virtue propped up by the small-town Quebecois community in which it takes place.” – Jessica Kiang, Variety

“The film is a j’accuse aimed at those complicit in oppressing the most vulnerable in order to protect the powerful.” – Pat Brown, Slant Magazine

“Any time you make a movie with well-played characters who compel the audience to want to shout at the screen, you’ve accomplished something.” – Roger Moore, Movie Nation