Produced and directed by filmmaker Bill Morrison, “let me come in” features a new song by Pulitzer Prize-winning composer David Lang performed by 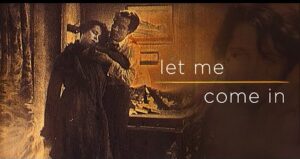 saving.” For “let me come in,” he has resurrected footage from what may be the last surviving reels of the 1928 German silent romance Pawns of Passion,  discovered in a Pennsylvania barn in 2012. After decades of expanding in hot summers and contracting in freezing winters, the deteriorated nitrate film

stock now reveals, in Morrison’s words, “imagery that seems to be pulled from a state of semi-consciousness, asleep but dreaming.” Morrison describes Lang’s song as “a rumination on love and the borderline separating two souls, seemingly from the precipice of consciousness. When I heard Angel Blue’s incredible

interpretation, my mind immediately recalled the ambiguous tension in this scene from Pawns of Passion.Left to rot in a barn, and then scanned and archived again for another eight years on my own personal hard drive, it has found a new life through David’s words and music, and Angel Blue’s voice. It was very exciting to see how quickly it came together and how perfectly the image, words and sound meshed.” Director Bill Morrison joins us for conversation on his inspired interpretation of hauntingly beautiful film fragments.

“let me come in” will receive its broadcast premiere as part of the TCM Classic Film Festival on May 7.

About the filmmaker – Bill Morrison  makes films that reframe long-forgotten moving images. His films have premiered at the New York, Rotterdam, Sundance, and Venice film festivals. In 2014 Morrison had a mid-career retrospective at MoMA. His found footage opus Decasia  (2002) was the first film of the 21st century to be selected to the Library of Congress’ National Film Registry. The Great Flood (2013),was recognized with the Smithsonian Ingenuity Award of 2014 for historical scholarship. Dawson City: Frozen Time  (2016) was included on over 100 critics’ lists of the best films of the year, and on numerous lists ranking the best films of the decade, including those of the Associated Press, Los Angeles Times and Vanity Fair. His work has previously been seen at LA Opera in productions of David Lang’s “anatomy theater” (2016) and David T. Little’s Soldier Songs (2019). Co-presented by Los Angeles Opera with composer David Lang and soprano Angel Blue. Special thanks to the Library of Congress National Audio-Visual Conservation Center. For more go to: billmorrisonfilm.com/bio-filmography

“Morrison’s world is one of the most breathtaking and haltingly disturbing cinematic realms of our time”.  – Glenn Kenny, RogerEbert.com