Kevin Shaw’s inside look into the politics of race, gentrification, 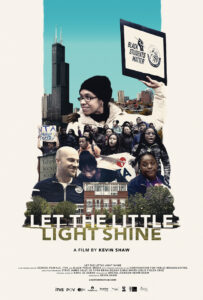 education and community concerns is on full display in his feature documentary LET THE LITTLE LIGHT SHINE. When city planners impose unwanted changes, one person can easily feel helpless – but a group of people with a common cause just might find enough collective strength to fight the power. LET THE LITTLE LIGHT SHINE tells the story of the parents, students, administrators and students of Chicago’s National Teachers Academy, a high-performing public elementary

school in an African-American neighborhood, who join forces in an effort to do just that. When the powers that be announce plans to phase out NTA’s current K-8 curriculum and transform it into a high school drawing students from other schools, the community senses gentrification at work and gets organized. Director Kevin Shaw joins us for a conversation on capturing the struggle to save NTA through all its highs and lows – introducing us to charismatic young leaders taking a stand to protect their academic futures.

For updates and screenings go to: lightshinefilm.com

About the filmmaker – As a director, producer and cinematographer, Kevin Shaw has created award-winning content for national television networks. Shaw was a segment director and cinematographer on “America to Me,” and additional cinematographer on “City So Real,” both from Oscar- nominated filmmaker Steve James. “America to Me” debuted to high acclaim at the 2018 Sundance Film Festival and premiered on Starz in August 2018, where it was lauded as the No. 1 television mini-series of the year by The Hollywood Reporter and The New York Times. Shaw’s debut documentary, “The Street Stops Here,” aired nationally on PBS and ESPN in 2010 to rave reviews. The following year, Shaw’s Big Ten Network short documentary on a quadriplegic trying to regain the ability to walk won the Edward R. Murrow Award for Sports Reporting Excellence. His cinematography talents were recognized in 2015 with a National Sports Emmy for ESPN’s FIFA World Cup Show Opens and Teases. Later that year, Shaw produced a documentary about the relationship between megastar Shaquille O’Neal and his collegiate coach, Dale Brown. “Shaq and Dale” premiered on ESPN.Shaw is a Firelight Media Documentary Lab Alum.

“What emerges are images of a Black Chicago rarely seen: Men, women, and children of various socioeconomic backgrounds, rallying around Black children’s futures and not just attending their funerals or trials.” – Ronda Racha Penrice, TheWrap

“Let The Little Light Shine shows an authentic look at a grassroots movement to save a school; a look at the politics, fake change, and catering to white people that places undue pain on Black people.” – DarkSkyLady, DarkSkyLady