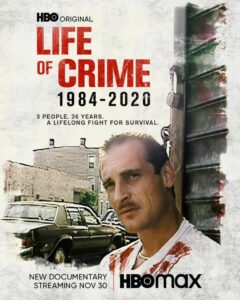 Emmy Award-winning producer/director Jon Alpert (HBO’s “Baghdad ER”). The third and final part of an epic documentary trilogy, LIFE OF CRIME: 1984-2020 tells the full story of three friends from Newark, New Jersey whose lives have been defined by and torn apart by their addictions. With unfettered access, LIFE OF CRIME: 1984-2020 bears witness to each of their journeys in and out of prison, rehab and in occasional jobs as they struggle to end the vicious cycles of drug use and to connect with the families they left behind. Authentic to true vérité filmmaking techniques, Alpert’s camera is observational, immersive, deeply intimate and unfiltered; the vast scope of the

timeline allows for an extensive window into the tragic toll that addiction can take on substance abusers and their loved ones. LIFE OF CRIME: 1984-2020 is tightly focused on three individuals living in one

of the roughest parts of Newark, New Jersey: Rob Steffy, a criminal surviving by shoplifting and robbery; Deliris Vasquez, one-time girlfriend of Rob’s and the mother of two children, whose heroin addiction leads to prostitution, prison, rehab and Freddie Rodriguez, whose petty crimes and drug use land him in and out of prison. Director and Producer Jon Alpert joins us for a conversation on how he found himself being pulled into the lives of three hopelessly lost souls desperately trying to find a way out.

Find out more about Jon Alpert’s work at: dctvny.org

About the filmmaker – Director, producer, writer, cinematographer and editor Jon Alpert is a native of Port Chester, New York, In 1970 he graduated Colgate University, and has a black belt in karate. Alpert has traveled widely as an investigative journalist and has reported from Vietnam, Cambodia, Iran, Nicaragua, the Philippines, Cuba, China, and Afghanistan.  He has made films for NBC, PBS, and HBO. Over the course of his career, he has won 15 Emmy Awards and three DuPont-Columbia Awards. He has been nominated for a 2010 Academy Award in the category of Best Documentary, Short Subject for China’s Unnatural Disaster: The Tears of Sichuan Province. He was nominated for a 2012 Academy Award in the same category for Redemption. Alpert won the Erikson Institute Prize for Excellence in Mental Health Media with co-director Ellen Goosenberg Kent for their documentary War Torn: 1861-2010.  In 1972, Alpert and his wife, Keiko Tsuno, founded the Downtown Community Television Center, one of the country’s first community media centers. He has interviewed Fidel Castro several times, and was one of the few Western journalists to have conducted a videotaped interview with Saddam Hussein since the Persian Gulf War. In 1991, while employed by NBC, Alpert was the first American journalist to bring back uncensored video footage from the first Persian Gulf War. The footage, much of it focusing on civilian casualties, was cancelled three hours before it was supposed to be aired, and Alpert was simultaneously fired. Later that year, CBS Evening News Executive Producer Tom Bettag planned to air the footage but this airing was also cancelled, and Bettag fired.