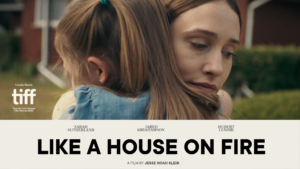 Dara (Sarah Sutherland) as she returns home to reconnect with her husband Danny (Jared Abrahamson) and her young daughter, whom she left two years earlier. When she arrives, she discovers that Therese, (Dominique Provost-Chalkley) who is seven months pregnant has taken her place. Compounding Dara’s anxiety, Isabel, (Margaux Vaillancourt) her daughter no longer recognizes her. LIKE A HOUSE ON FIRE tells the story of a woman’s struggle to regain the life she left behind.

used his film to take nuanced look at motherhood, trauma, mental health, marriage, identity and what it means to be a family. Under his direction a superb cast, led by Jared Abrahamson (Finding a Family) and a breakout performance by Sarah Sutherland (VEEP, Chronic) LIKE A HOUSE ON FIRE is a compelling tale of struggle and hope.

For news and updates go to: gametheoryfilms.com

Game Theory Films presents LIKE A HOUSE ON FIRE on digital platforms including iTunes/Apple TV, Vimeo on Demand and Amazon Direct.

About the filmmaker – Jesse Noah Klein is a filmmaker from Montréal. He studied film at The University of Texas at Austin and went on to teach in the United States before returning to his native Canada to teach and make films. His first feature We’re Still Together had its world premiere in competition at the Karlovy Vary International Film Festival, and went on to play at over 20 festivals worldwide. The film won two ACTRA awards as well as Prix Iris nominations at the Québec Cinéma Gala for outstanding male performance for its two leading actors. It is distributed by AZ Films in Canada and by Strand Releasing in the US and abroad.

About Sarah Sutherland – Upon graduating from New York University’s prestigious Tisch School of the Arts, Sutherland was cast alongside Julia Louis-Dreyfus as her daughter in HBO’s critically acclaimed and award-winning comedy series “Veep”. The political satire follows the life of former Senator Selina Meyer (Julia Louis-Dreyfus) and all that entails being the Vice President of the United States. Sutherland and the cast have been nominated 3 times in the category of Outstanding Performance by an Ensemble in a Comedy Series. Up next Sutherland has a leading role in the indie film “Like a House on Fire” and will co-star with Adam Brody in “Kid Detective.” Other credits include the features “Chronic” opposite Tim Roth, “What They Had” with Michael Shannon and Hilary Swank, and television appearances in HBO’s “The Newsroom” and “Tim and Eric’s Bedtime Stories” on Adult Swim.

“Sutherland…makes the subtle shades of pain ache and Dara’s mystery well worth exploring in a story that feels too real to distance yourself from.” – Roger Moore, Movie Nation

“Klein could have written [Danny and Thérèse] very differently and pushed Dara to a much darker place as a result, but he chose to embrace hope instead.” – Jared Mobarak, The Film Stage

“Sarah Sutherland is outstanding and does a great job and is the film’s standout. An emotional story that sometimes relies too much on heart wrenching moments.” – Nathaniel Muir, AIPT

“If you’re looking for a low-key, character-driven, existential little drama, you and Klein’s film will get on like a house on fire.” – Alex Saveliev, Film Threat