LITTLE FISH, the fourth feature film from director Chad Hartigan, is a romance 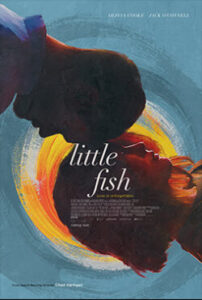 set in a near-future Seattle teetering on the brink of calamity. The film imagines a world where a pandemic has broken out, that strikes with no rhyme or reason, and causes its victims to lose their memories. This is the world that newlyweds Emma and Jude find themselves in, not long after meeting and falling in love. When Jude contracts the disease, the young couple will do anything to hold onto the memory of their love.  Starring Olivia Cooke (Sound of Metal, Thoroughbreds) as Emma, Jack O’Connell (’71, Starred Up) as Jude, Soko and Raul Castillo, LITTLE FISH, opens in the midst of a global epidemic: Neuroinflammatory Affliction, a severe and rapid Alzheimer’s-like condition in which people’s memories disappear. Couple Jude Williams and Emma Ryerson are grappling with the realities of

NIA, interspersed with glimpses from the past as the two meet and their relationship blooms. But as NIA’s grip on society tightens, blurring the lines between the past and the present, it becomes more and more difficult to know what’s true and what’s false. Director Chad Hartigan (Morris From America, This is Martin Bonner) joins us for a conversation on the making of his  subversively sly sci-fi / love story and how the on-screen artistry of the two lead actors helped shape this prescient tale of love in an age of isolation and mistrust.

For news and updates go to: littlefish.movie

About the filmmaker – Writer/director Chad Hartigan is best known for his award-winning feature films THIS IS MARTIN BONNER and MORRIS FROM AMERICA. Hartigan won the John Cassavetes Award at the 2014 Independent Spirit Awards, as well as the “Best of NEXT” Audience Award at the 2013 Sundance Film Festival, for THIS IS MARTIN BONNER. Hartigan won the Waldo Scott Screenwriter Award at the 2016 Sundance Film Festival for his film MORRIS FROM AMERICA. LITTLE FISH marks the third collaboration between childhood friends Hartigan, composer Keegan Dewitt (HEARTS BEAT LOUD) and cinematographer Sean McElwee (THE INCREDIBLE JESSICA JAMES). Based on Aja Gabel’s short story, the film is written by up and coming screenwriter Mattson Tomlin who co-wrote the latest Batman film, THE BATMAN, and wrote the Netflix hit PROJECT POWER.

“In the midst of a flurry of pandemic-themed media coming out which tries to reflect the [present] situation, LITTLE FISH manages to distinguish itself from the crowd with its brilliant leads and emotional resonance.” – Oluwatayo Adewole, The Spool

“The result is better than smart, it’s stirring. With the NIA pandemic as a pretext, the essential subject becomes memory — its fragility, its wondrousness, its centrality to our existence as sentient beings.” – Joe Morgenstern, Wall Street Journal

“Hartigan’s moody evocation of Emma and Jack’s love – and the way in which it, like so much else, is predicated on knowledge of the past – casts a moving spell.” – Nick Schager, Variety

“Chad Hartigan’s Little Fish drips with equal doses of beauty and poignancy – an affecting dive into love and memory, and how it defines who we are.” – Natasha Alvar, Cultured Vultures