Love, It Was Not is a tragic love story between a prisoner and a Nazi. Beautiful 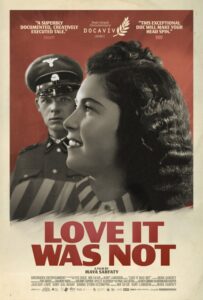 and full of life, Helena Citron, is taken to Auschwitz as a young woman, and soon finds unlikely solace under the protection of Franz Wunsch, a high-ranking SS officer who falls in love with her and her magnetic singing voice. Risking execution if caught, they went on with their forbidden relationship until the war ended and the camp was liberated. Thirty years later, a letter arrives from Wunsch’s wife asking Helena to “return the

favor”– testify on Wunsch’s behalf. Faced with an impossible decision, Helena must choose. Will she help the man who brutalized so many lives, but saved hers? Director Maya Sarfaty joins us for a conversation on one woman’s unbelievably conflicted dilemma happening in the most reviled place on earth during a monstrously evil war to exterminate her family and her people.

For news go to: greenwichentertainment.com/film/love-it-was-not

HELENA CITRON (ZIPORA TAHORI) – Helena was among the first 1000 women transported to Auschwitz. For two and a half years she had a romantic relationship with SS officer Franz Wunsch.

ROZA CITRON (SHOSHANNA ORENSTEIN)  – Helena’s older sister. She was saved by Helena’s admirer, SS officer Franz Wunsch, but both of her children were murdered.

FRANZ WUNSCH – An SS officer in Auschwitz. He was known to be brutal, but towards Helena and those close to her he showed mercy. Ultimately, he saved Rosa from the gas chambers.

Director’s statement – As a child, my first theatre teacher was Helena Citron’s niece. She entrusted me with the story of the two sisters with the understanding that one day, I would become a voice and share these events. Throughout my years as an artist I have strived to tell this story. By trying to write it as prose, I was embarrassed looking down at my words, feeling they had failed to reflect those epic events as real-life experiences. Five years ago, when we first got in touch with the Nazi’s daughter, I was struck with the understanding that the exact medium for this story should be a documentary. I realized that my job was to provide a stage on which this story’s real heroes would share their memories, using their own words and describing the events that shaped their lives. The ambivalence between good and evil is what drove me at first. Franz was both a sadistic monster, and a gentleman capable of love and compassion. Helena was also not your ideal image of an innocent victim: a strong woman with unbelievable survival skills, who managed to love a cruel SS officer and even forgive him for his inconceivable actions, in light of him helping her and her sister. As I see it, appealing the dichotomous perception of good versus evil is the cornerstone for this film’s relevance to our current lives. That is what makes it an important story that had to be told. Love, It Was Not inevitably raises ethical questions concerning the protagonists of the past. It strives to avoid judgment, yet it offers a direct human take of their lives during the terrible period in the deathcamp, and the efforts they needed afterwards to come back into the living. “ – Maya Sarfaty

“A heartbreaking and dangerous love story during the Holocaust. A masterpiece; amazing. Absorbing and affecting.” – The Times of Israel

“A superbly documented tale about a taboo romance between a Jewish prisoner and her SS captor.” – Variety