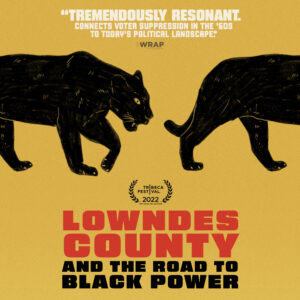 high point of the Civil Rights

Movement, there was something else blooming in  Alabama beyond the terminus of the Edmund Pettus Bridge, just beyond the camera’s eye. Stokely Carmichael—a dynamic, young organizer also from SNCC—used this moment on the sidelines to make connections in the crowd, gathering names and information. For Carmichael and the community whose stories he absorbed, this

pivotal moment wasn’t a culmination, but a beginning. Nowhere was this next battle better epitomized than in Lowndes County, Alabama, a rural, impoverished county with a vicious history of racist terrorism. In a county that was 80 percent Black but had zero Black voters, laws were just paper without power. This isn’t a story of hope but of action. Through first person

accounts and searing archival footage, LOWNDES COUNTY AND THE ROAD TO BLACK POWER tells the story of the local movement and young Student Nonviolent Coordinating Committee (SNCC) organizers who fought not just for voting rights, but for Black Power in Lowndes County. Co-directors Geeta Gandbhir (Black and Missing, I Am Evidence) and Sam Pollard (MLK/FBI, Four Little Girls) join us for a conversation on bringing to life the activism and courage of people like Ella Baker, John Hulett, Courtland Cox, Ruby Sales, Reverend Wendell Paris and one of the most consequential Civil Rights leaders Kwame Ture (Stokely Carmichael).

About the filmmaker – Director / Producer / Editor Geeta Gandbhir started her career in narrative film under Spike Lee and Sam Pollard. After working for 11 years in the edit room in scripted film, with filmmakers including Merchant Ivory, the Coen Brothers, Robert Altman, she branched into documentary film. She recently directed and show-ran a four-part series for HBO titled Black and Missing, which is currently airing on HBO and won a 2022 NAACP Award for Best Directing, a 2022 Independent Spirit Award for Best Documentary Series and a 2022 ATAS Honors Award. She also recently directed Apart, with Rudy Valdez for HBOMax which was nominated for an NAACP Award. Her 2020 short film with Topic Studios, Call Center Blues, was shortlisted for a 2021 Academy Award®, and she directed an episode of the five-part series of the Asian Americans for PBS, which won the 2021 Peabody Award. Other projects include directing the six-part series Why We Hate for Jigsaw Productions and Amblin Entertainment for Discovery, the feature documentary I Am Evidence for HBO which won a 2019 Emmy, DuPont and ATAS Award, and the film Armed with Faith for PBS which won a 2019 News and Documentary Emmy. In 2017 she directed an episode of the Netflix series The Rapture featuring rap artist Rapsody. In 2016 her feature documentary, Prison Dogs, which she co-directed with Perri Peltz, premiered at the Tribeca Film Festival, and her film A Journey of a Thousand Miles: Peacekeepers premiered at the 2015 Toronto Film Festival and later aired on PBS as part of the series Women, War and Peace. She also co-directed and co-produced the series A Conversation on Race series with The New York Times Op-Docs, which won an Online Journalism Award for Online Commentary, an AFI Documentary Film Festival Audience Award for Best Short and garnered a MacArthur Grant. She was also a co-producer on the HBO film The Sentence, directed by Rudy Valdez which won a 2019 Emmy. As an editor, her films have won one Academy Award®, two Emmy Awards and five Peabody awards.

About the filmmaker – Sam Pollard is a veteran feature film and television video editor, and documentary producer/director. Between 1990 and 2010, he edited a number of Spike Lee films: Mo’ Better Blues, Jungle Fever, Girl 6, Clockers, and Bamboozled. Pollard and Lee co-produced a number of documentary productions for the small and big screen, including Four Little Girls, a feature-length documentary about the 1963 Birmingham church bombings which was nominated for an Academy Award® in 1998 and When The Levees Broke, a four-part documentary that won numerous awards, including a Peabody and three Emmy Awards. Five years later 2010 he co-produced and supervised the edit on the follow up, If God Is Willing And Da Creek Don’t Rise. As a producer / director, since 2015, his credits include: Slavery By Another Name, (2015) a 90-minute documentary for PBS that was in competition at the Sundance Festival; August Wilson: The Ground On Which I Stand, (2015) a 90-minute documentary for American Masters; Two Trains Runnin, a feature length documentary, which premiered at the Full Frame Film Festival in 2016; and Sammy Davis Jr., I’ve Gotta Be Me for American Masters premièred at the 2017 Toronto International Film Festival. In 2019, he co-directed the six-part series, Why We Hate, which premiered on The Discovery Channel. In 2020 he was one of the directors on the 2020 HBO Series Atlanta’s Missing and Murdered: The Lost Children. also that year, he completed MLK/FBI,  which premiered at the Toronto Film Festival and was also featured at the New York Film Festival.

“It is, quite simply, one of the best documentaries of the year.” – Robert Daniels, The Playlist

“Lowndes County and the Road to Black Power is accessible, passionate, and motivated by the principle of community that led to the Black Power movement.” – Peyton Robinson, RogerEbert.com

“Gandbhir and Pollard are able to lay their hands on some startling footage, but paint an equally vivid picture around it as they interview those that are still standing today in Lowndes, no doubt because they stood up for themselves.” – Stephen Saito, Moveable Fest