In the unnerving and creeping panic that is LUCKY, life takes a sudden 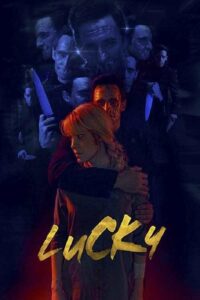 turn for May, a popular self-help book author, when she finds herself the target of a mysterious man with murderous intentions. Every night, without fail he comes after her, and every day the people around her barely seem to notice. With no one to turn to, May is pushed to her limits and must take matters into her own hands to survive and to regain control of her life. The sophomore feature from Iranian-American filmmaker Natasha Kermani (Imitation Girl), Lucky is written and starring Brea Grant, star of the indie darling AFTER MIDNIGHT and writer/director of the critically

acclaimed dark comedy 12 HOUR SHHIFT  Home invasion horror by way of a time loop mystery, LUCKY is a uniquely nightmarish, darkly funny, and timely slasher, and a thrilling addition to the 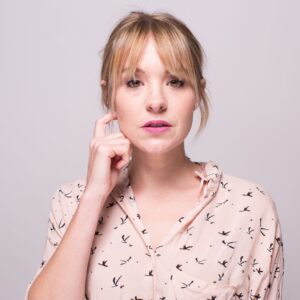 Final Girl genre. Brea Grant stars alongside Dhruv Uday Singh (Good Trouble) and Kausar Mohammed (East of La Brea, What Men Want). Director Natasha Kermani and screenwriter / lead actor Brea Grant join us to talk about how they brought life to their feminist allegory on how relentless cultural and psychological duress undermines women and why injecting their perspective into a horror genre helps them deliver the appropriate mix of fear and reflection.

For news, updates and screenings go to: epic-pictures.com/lucky

Lucky will premiere and debut exclusively to Shudder on March 4th in the US, Canada, UK, Ireland, Australia, and New Zealand, as well as via the Shudder offering within the AMC+ bundle where available. www.shudder.com.

About the filmmaker – Director Natasha Kermani is a writer and director in LA/NY, and the co-founder of Illium Pictures. Natasha’s credits includes science-fiction feature film Imitation Girl (FrightFest ‘17), starring Lauren Ashley Carter. Short form work includes Lewis Black’s web series The Mentors (for which she won Best Director at the NYC Web Fest), the very first live-action short film of beloved manga series, Battle Angel Alita, and the short film POLE, the first film to be funded entirely on twitch.tv. Kermani has directed a variety of commercial content for clients including NYDJ, Thinx, Microsoft, and ThirdLove. Outside film and television, Natasha is a violinist and composer who enjoys playing live shows with local bands and ensembles. Natasha’s Iranian-American heritage, her interest in female-led stories, and her love for genre- filmmaking all converge in her work — a lyrical exploration of how we experience the world around us.

About the filmmaker – Writer and Lead Actor Brea Grant’s first television acting job was on Friday Night Lights. She is best known for her role as Daphne Millbrook on Heroes. Other TV credits include the series, Cold Case. She has starred in several films, including Battle Planet and Homecoming. She directed and starred in a post-apocalyptic film called Best Friends Forever. She also created a comic book miniseries called We Will Bury You with her brother Zane Grant and artist Kyle Strahm. She continued with the SuicideGirls comic miniseries, based on the pin-up web site of the same name.

“As the filmmakers dial in tighter on those keen observations, their movie gets more and more chilling.” – Noel Murray, Los Angeles Times

“Lucky has something to say, and Grant has thought very deeply about the subjects of violence against women and trauma, as well as gender-based assumptions about these things.” – Sheila O’Malley, RogerEbert.com

“Lucky is a suspenseful, magnificently told metaphor for the real-life horrors women face on a daily basis.” – Molly Henery, The Blogging Banshee

“If you know someone who doesn’t quite grasp the emotional terrorism behind concepts like gaslighting and victim-blaming, sit them down with Lucky.” – Katie Rife, AV Club

“Harrowing experiences are revealed through disorienting sequences heightened by sleek cinematography from Julia Swain and a powerful lead performance from Grant.” – Katherine McLaughlin, Through the Trees