In this beautifully rendered gem of a film, Lunana – A Yak in the Classroom, a 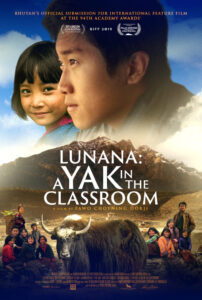 young teacher in modern Bhutan, Ugyen, shirks his duties while planning to go to 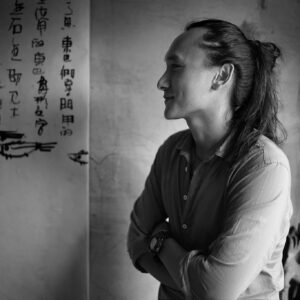 Australia to become a singer. As a reprimand, his superiors send him to the most remote school in the world, in a village called Lunana, to complete his service. He  finds himself exiled from his Westernized comforts after an arduous 8 day trek just to get there. There he finds no electricity, no textbooks, not even a blackboard. Though poor, the villagers extend a warm welcome to their new teacher, but he faces the daunting task of teaching the village children without any supplies. He wants to quit and go home, but he begins to learn of 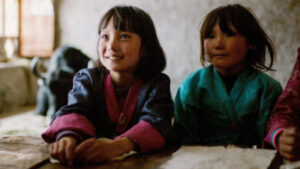 the hardship in the lives of the beautiful children he teaches, and begins to be transformed through the amazing spiritual strength of the villagers. Director and writer Pawo Choyning Dorji stops by to talk about his home country of Bhutan and his nation’s aspirational motto “Gross National Happiness”, the challenges of making a film in a community with no modern utilities and the joy that comes from facilitating a spectrum of disarming performances from people who had never seen a film before his arrival.

For more go to: samuelgoldwynfilms.com/lunana-a-yak-in-the-classroom

Director’s Statement – The film was shot on-location at the world’s most remote school, in the village of Lunana. The village is a settlement that’s sits along the glaciers of the Himalayas, only accessible through an 8-day trek over some of the highest mountains of the world. There are only 56 people in the village, most of whom had never seen the world outside their village. The word ‘Lunana’ literally means the dark valley; a valley so far and distant that the light doesn’t even reach it. So isolated is the village that even to this day, there are no electricity and cellular network connections. Due to the lack of facilities, the production of the film was totally dependent on solar charged batteries. Though extremely challenging, I specifically wanted to shoot the movie in Lunana, inspired by the purity of the lands and the people. I also wanted everyone involved in the production to experience this life changing journey, so that the authenticity of experience could translate on to the film.  The major themes of the story are ‘the search for happiness and a sense of belonging’, and these are universal themes that everyone can relate to irrespective of one’s culture and background. However I wanted to present those themes through a medium like Lunana, a world and a people that are so different from not only the rest of the world, but from also Bhutan itself. I wanted to show that even if in such a unique world, the hopes and dreams that connect humanity are the same.

About the filmmaker – Pawo Choyning Dorji (Director & Writer) is a writer,

photographer and filmmaker from the Kingdom of Bhutan. Pawo’s introduction to film came in 2012 when he worked as Khyentse Norbu’s assistant for the later’s feature; Vara: A Blessing. In 2016 he produced the critically acclaimed Bhutanese feature Hema Hema: Sing me a song while I wait. The film had its world premiere at the 69th Festival del film Locarno and went on to win the Special Mention at the 2016 Toronto International Film Festival. Lunana: A Yak in the Classroom is his Directorial debut.

“The story arc of Lunana may offer few surprises but Dorji handles it with confidence and buckets of charm.” – Allan Hunter, Screen International

“Only Bhutan’s second submission to the Oscars … [it’s] such a wonderful film I’m not sure many would have had a chance to see.” – Edward Douglas, The Weekend Warrior