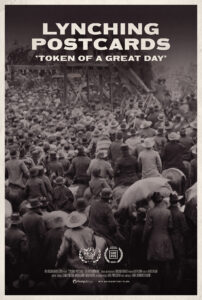 America’s sordid racist history from 1880 to 1968, when over 4,000 African Americans were lynched at the hands of white mobs. Staged as public celebrations akin to picnics or

carnivals, these lynchings were commemorated through the printing and distribution of photos and postcards that would ultimately be subverted by Black activists to expose racist violence in the U.S. to the nation’s leaders and to the rest of the world. Lynching Postcards: Token of a Great Day is a documentary short film and is a

production of Firelight Films in association with MTV Documentary Films. Director Christine Turner stops by to talk about how she came to know about these horrifying  artifacts, what they say about the people who took the photos, printed the postcards and the people who bought them and sent them to friends and family, as well as the film making Oscar© Shortlist for Best Documentary Short.

For news and updates go to: firelightfilms.tv/films/lynching-postcards

For more on the filmmaker go to: christineturner.com

About the filmmaker – Christine Turner is a filmmaker whose work has been called “Exquisitely tender” and “Thoughtful and enlightening” by The Washington Post.  Most recently, her short film Betye Saar: Taking Care of Business, premiered at the 2020 Sundance Film Festival and was featured as a New York Times Op-Doc. Previously, Christine directed the critically acclaimed documentary Homegoings, about a renowned funeral director in Harlem.  Now streaming on the Criterion Channel, the film premiered at Documentary Fortnight at MoMA and aired nationally on the PBS series POV in 2013.  In addition, Christine’s fiction shorts have screened at festivals widely including Sundance and Tribeca. With over a decade of experience in television production, Christine also collaborates on non-fiction series and documentary specials for broadcast and streaming.  Her latest film Lynching Postcards: “Token of a Great Day,”a production of Firelight Films in association with MTV Docs, is now streaming on Paramount+.  For more go to: christineturner.com