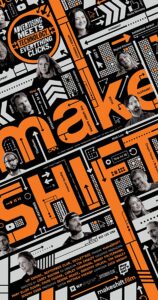 MakeSHIFT explores the art and science behind the advertising industry’s 20+ year evolution. We hear from many of the industries highest profile players, industry leaders,  developers, designers  and creative directors and

founders at some of the most innovative agencies in the world, both small and large, digital and traditional. MakeSHIFT takes an inside look at how these makers and agencies have shifted and re-shifted their skillsets, creativity, and businesses, as new creative technologies emerged, declined, and were replaced by the next technology in an endless cycle of change. MakeSHIFT shines light on this beautifully frustrating pattern, and celebrates the

makers that have embraced the shift and thrived. From the heyday of TV advertising, to the dawn of the Internet, to the rise of the digital experience, MakeSHIFT focuses on the industries adaptability in the face of a constantly changing digital landscape, daring to say “yes” before something is completely ready, and stretching ideas to new technological applications. Co-directors Casey Suchan (The Animal People) and Tim Cawley (Well-Founded Concerns) join us to talk about how unrelentingly competitive the world of advertising can be, the quantum leap that world has taken over the last 20 years and what the future holds for the art of persuasion.

For news and updates go to: makeshift.film

About the filmmaker – Casey Suchan directed Rock The Bells, a Warner Brothers documentary on the final performance of hip-hop artists Wu-Tang Clan. Rock The Bells was a Tribecca Premiere and picked up for distribution by Warner Brothers. Recently Casey directed The Animal People — a feature documentary for Executive Producer Joaquin Phoenix about a precedent setting case brought against the activist organization “Stop Huntington Animal Cruelty USA”, and in 2020 finished work as lead director on Make/Shift — a branded documentary sponsored by WordPress about marketing in the digital age. To see some of Casey’s work, click here.

About the filmmaker – Tim Cawley is founder and Chief Creative Officer of HeyLet’sGo! In 2014 he co-founded Sleek Machine, which grew to be one of the most highly-regarded small agencies in New England. In 2019, he took all he’d learned from that venture and channeled it into HeyLet’sGo! Tim’s work as a Writer, Director and Creative Director has been featured in Adweek, Ad Age’s Creativity Online, One Show, Cannes, Clio, Webbys, Shorty Awards, The Minneapolis Show, Communication Arts, and the New England Hatch Awards (twice winning Best of Show). He’s name-checked in the influential advertising book Hey Whipple, Squeeze This. Archive Magazine ranks him as one of the top ten U.S. writers of all time. Beyond advertising, his films have screened in competition at such festivals at Locarno, Montreal World, Vancouver, New Orleans, FantasticFest, Cleveland and Independent Film Festival of Boston. His feature-length documentary “From Nothing, Something” was acquired by The Orchard – one of the world’s largest independent distributors – and released in over a dozen countries worldwide. Tim is also an ASCAP songwriter whose music has been featured in hundreds of television shows around the world.

“Any small business person or really anyone selling anything should make Make|SHIFT required viewing.” – Tom Santilli, Movie Show Plus

“If you’ve never given advertising much though, you’ll find this documentary a real eye-opener.” – Jennie Kermode, Eye for Film