In this smart, funny and beguiling film, MARCEL THE SHELL WITH SHOES ON, 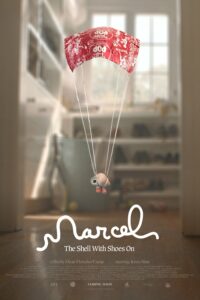 Connie and their pet lint, Alan. Once part of a sprawling community of shells, they now live alone as the sole survivors of a mysterious tragedy. But when a documentary filmmaker discovers them amongst the clutter of his Airbnb, the short film he posts online brings  Marcel millions of passionate fans, as well as

unprecedented dangers and a new hope at finding his long-lost family. Marcel gets his big-screen debut in this hilarious and heartwarming story about finding connection in the smallest corners. Director / co-screenwriter Dean Fleischer Camp joins us for a conversation on backstory behind Marcel, working with Isabella Rossellini, the viral explosion of Marcel more than 10 years ago and his determination to tell Marcel’s story the way he and Marcel’s extended family wanted it told.

For news and screenings go to: a24films.com/marcel-the-shell-with-shoes-on

See Marcel in a theatre: tickets.marceltheshell.movie

About the filmmaker – Dean Fleischer Camp is the award-winning filmmaker and New York Times-bestselling author who created viral sensation MARCEL THE SHELL WITH SHOES ON. Since appearing on Filmmaker Magazine’s 25 New Faces of Independent Film in 2011, Camp’s work has been profiled in virtually every major American media outlet. In 2018, his first feature FRAUD was released to widespread controversy and acclaim, described as “brilliantly provocative” (Filmmaker) and “exhilarating” (Sight+Sound) “masterwork” Documentary Magazine) that “pushes the boundaries of documentary filmmaking” (Variety).  His first scripted feature, an adaptation of MARCEL THE SHELL WITH SHOES ON starring Jenny Slate, Isabella Rossellini and Rosa Salazar, is slated for a 2022 theatrical release via A24. He has directed for Comedy Central, HBO, TBS, Adult Swim and Disney Interactive. Commercial clients include Atlassian, Pop-Tarts, Clearasil, Maltesers, and many others.

“It fills a movie about a talking seashell with such a realistically sad context and a tender, deep-seated sense of longing and pain that’s near impossible to shake while watching.” – Trace Sauveur, Austin Chronicle

“What you’ll scope out in this small marvel of a mockumentary is how Marcel copes with loss of family, loneliness and sudden media fame, and how he relates, on 60 Minutes, to Lesley Stahl. I can’t wait to see it and him again.” – Joe Morgenstern, Wall Street Journal

“Many films claim to be an antidote to this moment in history, but Marcel’s flick might be the first one I’ve seen in the past two years that actually fits that bill.” – Lovia Gyarkye, Hollywood Reporter