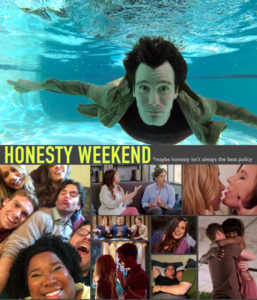 completely honest with each other for an entire weekend, a young married couple attempts to execute this advice over two days with good friends at a country house. At first amused by the couple’s newfound honesty, soon everyone is infected with the “honesty virus”. Secrets spill and desires flare to life. And when husband John’s sexy lesbian friend Delaney arrives to stir the pot, the whole thing heats up until it boils over. At the heart of this relationship comedy is a young marriage in trouble, but look deeper and you’ll see the angsty discomfort of early thirty-somethings struggling to embrace

(Captain Marvel), Evan Watkins (College Humor Originals),  Allan Wasserman (Big), and Susan Walters (The Vampire Diaries). Director and writer Leslie Thomas joins is for an engaging conversation on a compressed shooting schedule, holding out for the right cast of actors, as well as the challenges and rewards of being a first time director.

For news and updates go to: honestyweekend.com

Honesty Weekend screens at PIFF on Saturday, March 14 at 6:15 PM

About the filmmaker: LESLIE THOMAS produced the 2018 Emmy-winning documentary feature KEVYN AUCOIN Beauty & The Beast In Me (now on Netflix). She is the showrunner of ratings record breakers HALLOWEEN, HOLIDAY & KIDS BAKING CHAMPIONSHIPS on Food Network. She’s a playwright and a California native who studied Film & TV at Loyola Marymount University. Honesty Weekend is her first feature.

For more on the work of Leslie Thomas go to: puttimedia.com