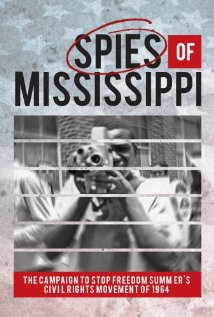 Spies of Mississippi tells the story of a secret spy agency formed by the state of Mississippi to preserve segregation and maintain “the Mississippi way of life,” white supremacy, during the 1950s and ‘60s. The Mississippi State Sovereignty Commission (MSSC) evolved from a predominantly public relations agency to a full-fledged spy operation, spying on over 87,000 Americans over the course of a decade. Weaving in chilling footage of Ku Klux Klan rallies and government propaganda films alongside rare images and interviews from the period, Spies of Mississippi tracks the Commission’s hidden role in many of the most important chapters of the civil rights movement, including the integration of the University of Mississippi, the assassination of Medgar Evers, and the KKK murders of three civil rights workers in 1964. Director Dawn Porter joins us to talk about the impact the MSSC had on the African-American community then and now.

“Peer into the history of the South, and it’s not hard to find things that once might have seemed acceptable to many people but today register as appalling. “Spies of Mississippi” is such an exploration, one with an especially clear parallel to today.” – New York Times

“Spies of Mississippi is as cohesive as it is engaging, another interesting portrait of a time in our past too often regarded as a sort of ancient history. Here, the links between the activities of the Sovereignty Commission and our government’s activities today are made clear, ending on a disturbing but thought provoking final note that asks the viewer to always question the morality of a government that spies on its citizens.” – Indiewire