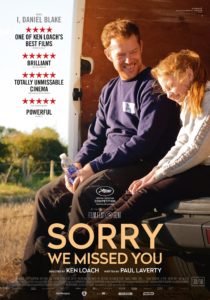 the human cost of our shopping habits and changing workforce. After losing their home in a financial crisis, Ricky and Abby trade the car she uses as a visiting nurse for a van, so Ricky can work as a delivery driver. The advantages of being self-employed come with the constant pressure of meeting impossible deadlines with no margin for error, sickness, or family emergency. Loach’s compassionate, hard-hitting drama will make you rethink your expectations the next time you enjoy the

convenience of overnight delivery. Director Ken Loach (KES, THE WIND THAT SHAKES THE BARLEY, I, DANIEL BLAKE) joins us for a conversation on the explosion of the “gig-economy” and the insidious impact its having on work schedules, worker safety, worker health and on the emotional toll it’s taking on raising a family.

For news, screenings and updates go to: zeitgeistfilms.com/film/sorrywemissedyou

“FIVE STARS! Ken Loach raises his game yet further with this gut-wrenching tale of a delivery worker driven to the brink… It’s fierce, open and angry, unironised and unadorned..This brilliant film will focus minds. ” – Peter Bradshaw, THE GUARDIAN

“Ken Loach has done it again. His new film is another intimate and powerful drama about what’s going on in people’s everyday lives—not just in England, but all over the world.”  – Owen Gleiberman, VARIETY

“At age 82, [Ken Loach is] doing some of his strongest work in Sorry We Missed You, a drama of such searing human empathy and quotidian heartbreak that its powerful climactic scenes actually impede your breathing… This is an expertly judged and profoundly humane movie…. You’d have to be made of stone not to be moved to your core by it.” – David Rooney, THE HOLLYWOOD REPORTER