MATERNA is an utterly unique and original psychological portrait of 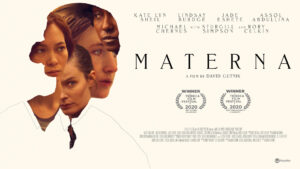 four women, whose lives are bound together by an incident on the New York City subway. Jean (Kate Lyn Sheil), Mona (Jade Eshete), Ruth (Lindsay Burdge), and Perizad (Assol Abdullina) are four radically different women whose lives are separated by race, culture, religion, and class but connected by the complexities of motherhood. When they face a threat on the New York City subway, their shared isolation

suddenly becomes a shared connection, inextricably bounding their lives together. The film was shot around NYC and on the Subway and looks to explore vulnerability and our most hidden personal conflicts so often kept secret to the outside world.  MATERNA is David Gutnik’s debut feature and was awarded Best Actress and Best Cinematography at the 2020 Tribeca Film Festival, where Gutnik was also

nominated for Best New Director. David Gutnik is also the editor of several acclaimed features, including Christina Choe’s 2018 Sundance Award-Winning Nancy. Director David Gutnik joins us to talk about his powerful, piercing debut feature film and how working with his superb cast and collaborators helped him  explore his character’s deepest secrets and why these tortured relationships can have a profound impact on the present and the future.

About the filmmaker – David Gutnik, Co-Writer/Director, is a Russian-American writer and director from Brooklyn, New York. MATERNA, Gutnik’s debut feature film, was awarded Best Actress and Best Cinematography at the 2020 Tribeca Film Festival, where Gutnik was also nominated for Best New Director. Gutnik is also the editor of several acclaimed features, including Christina Choe’s 2018 Sundance Award-Winning NANCY. He was a 2017 Sundance Institute Fellow and received his MFA in Film at Columbia University.

About the filmmaker – Assol Abdullina, Co-Writer/Lead Actress/EP,  is a NYC based writer and actress from Kyrgyzstan. Abdullina won the Best Actress Award for Materna at the 2020 Tribeca Film Festival, where she was also nominated for Best Screenplay and the Nora Ephron Award. She is a recent graduate of The New School for Drama. Film: FIRST SNOW, HE/SHE/EXIT/SIGNS, ONLY SOLOMON LEE, THE BIRDS OF PARADISE. Theater: Arcticfox in Annie Dorsen’s”The Slow Room” at Performance Space New York; Mandy in Donald Margulies’s “Time Stands Still” at 13th Street Rep. She lives in Queens, New York.

About the filmmaker – Jade Eshete, Co-Writer/Lead Actress/EP, has a series recurring role on BILLIONS and most recently starred in MACRO’s REALLY LOVE (2020 SXSW Film Festival) alongside Kofi Siriboe, Uzo Aduba and Blair Underwood. Past credits include series regular and recurring roles on the Max Landis-helmed series DIRK GENTLY’S HOLISTIC DETECTIVE AGENCY on BBC America and NBC’s SHADES OF BLUE. She is based in NYC.

“A fascinating anthology of tales that offers an impressive showcase for a quartet of talented actresses – and writers, in the case of Jade Eshete and Assol Abdullina, who pull double duty.” – Stephen Saito, Moveable Fest

“It’s moments of abject fright where impulse takes over in ways that show who we are beneath the images we present to the world.” – Jared Mobarak, Jaredmobarak.com

“They’re each riveting little short stories in and of themselves, with their own purposes that feed into the larger whole. … Every piece here builds on the others.” – Jason Adams, My New Plaid Pants