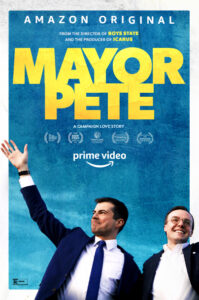 viewers inside Pete Buttigieg’s campaign to be the youngest President of the United States.providing an unprecedented intimacy with the candidate, his husband Chasten, and their ambitious team. From the earliest days of the campaign, to his unlikely, triumphant victory in Iowa and beyond, this lm reveals what really goes on inside a campaign for the highest office in

the land—and the myriad ways it changes the lives of those at its center. Recently appointed U.S. Secretary of Transportation, Buttigieg serves as the first openly LGBTQ Senate-confirmed Cabinet member in U.S. history. Director Jess Moss (The Overnighters, The Family, Boys State) joins us to talk about the challenges of documenting a white hot presidential campaign and the possible next leader of the free world while chronicling the relationship of the first openly gay presidential candidate and his husband.

About the filmmaker –  Director, Producer, Director of Photography Jesse Moss is an Emmy Award® and Sundance Grand Jury Prize-winning director. His last lm Boys State, co-directed with Amanda McBaine, premiered at the 2020 Sundance Film Festival. The lm was awarded the Grand Jury Prize and released by Apple Original Films and A24. The lm was shortlisted for the Academy Award for Best Feature Documentary and nominated for two Primetime Emmys. It won the 2021 Primetime Emmy for Outstanding Documentary. Former President Barack Obama included Boys State among his favorite movies of 2020. The lm won the Cinema Eye Audience Choice Prize and the Critics’ Choice Award for Best Political Documentary of 2020. Earlier work includes The Overnighters, awarded the Special Jury Prize at the Sundance Film Festival, released by Drafthouse Films and Netix, and shortlisted for the Academy Award. Other work includes the Netix series The Family, and the Payday episode of the Netix series Dirty Money. He has twice been nominated by the Directors Guild of America for Outstanding Directorial Achievement. For more go to: jessemoss.com

“Some of the behind-the-curtain glimpses are fascinating, from a friendly exchange with Joe Biden, his current boss, as the two run across each other on the trail to the strategizing with staff, from messaging to debate prep.” – Brian Lowry, CNN.com

“The film provides a window into what it takes to run a presidential campaign, and features fascinating intimacy with Buttigieg, his husband Chasten, and their team.” – Sarah McMullan, Stuff.co.nz

“It does have the benefit of showing a man who seems destined to remain a force in American politics, growing into the role in real time.” – David Rooney, Hollywood Reporter