The story behind MIDWIVES is the story of Hla and Nyo Nyo, both living and working 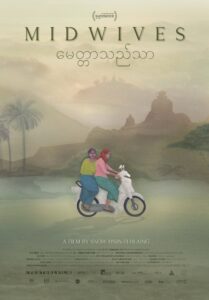 side-by-side in a country torn by ethnic conflict. Hla is a Buddhist and the owner of a makeshift medical clinic in western Myanmar, where the Rohingya (a Muslim minority community) are persecuted and denied basic rights. Nyo Nyo is a Muslim and an apprentice midwife who acts as an assistant and translator at the clinic. Her family has lived in the area for generations, yet they are still considered intruders. Encouraged and challenged by Hla, who risks her own safety daily by helping Muslim patients, Nyo

Nyo is determined to become a steady health care provider for her community. The filmmaker’s gentle, impartial gaze grants unique access to these courageous women who unite to bring forth life. Filled with love, empathy, and hope, MIDWIVES offers a rare insight into the complex reality of Myanmar and its people.

Director Snow Hnin Ei Hlaing (Burmese Butterfly) joins us for a conversation on her own journey, that included filming in Myanmar for over five turbulent years, witnessing the vilification and ostracized by the international community for their brutal treatment of the Rohingya people and gaining the trust and respect of the women who have made the clinic an integral part of the communities they serve.

For updates and screenings go to: dogwoofsales.com/midwives

About the filmmaker – Director Snow Hnin Ei Hlaing worked as a freelance filmmaker in Myanmar since 2006, acting as director, producer, editor, and sound recordist after attending film schools in both Myanmar and Germany. Her documentary short BURMESE BUTTERFLY played festivals in more than 20 countries, and PERIOD@PERIOD won for Best Short at the Wathann Film Festival. MIDWIVES is her feature documentary debut.

“It’s a reminder that heroes are rarely perfect humans. And a reminder of the intense courage that is often required to do the human thing in times of great strife.” – Bilge Ebiri, Spirituality & Health

“A powerful film about the complexity of not only being women within a traditional society but with the additional factors of propaganda and violence being added in.” – Ikram Mohamed, Austin Chronicle

“It is quite poignant and a peculiar testament to resilience, to observe this woman so resolute and full of hope thinking about things as mundane as fashion in times when bombs and gunshots can be heard nearby.” – Hanna B, Film Threat