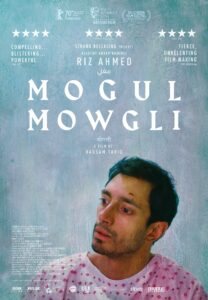 vital and electrifying exploration of heritage and identity. Coming off his historic Academy Award Best Actor nomination for SOUND OF METAL, Riz Ahmed, inhabits the character of Zed or Zaheer, a British Pakistani rapper, who, on the brink of his first international tour decides to fly home to the UK to visit the family he has not seen in two years. In the midst of his attempt to reconnect with his parents, particularly his father, he is suddenly struck down by an autoimmune disease. As his condition worsens and his big breakthrough moment is in danger of vanishing into thin air, Zed descends into a

physical and emotional crisis, amplified by vivid hallucinations. MOGUL MOWGLI was recently nominated for Best British Film at the 2021 BAFTA and received six 2020 British Independent Film Awards (BIFA) nominations, with Ahmed winning Best Debut Screenwriter. Ahmed won the 41st London Critics’ Circle Film Award for British/Irish Actor of the Year (for body of work) for performances including Zed in MOGUL MOWGLI. Director and writer Bassam Tariq stops by for a conversation on the challenge of navigating the multiple worlds that Zed lives in, collaborating with Riz Ahmed and incorporating the lessons learned from his work in documentary filmmaking into the world of narrative story-telling.

For screenings and updates go to: strandreleasing.com/films/mogul-mowgli

About the filmmaker – Bassam Tariq is a writer and director from New York. He recently won the Short Film Jury Prize at Sundance for Ghosts of Sugar Land (2019) which is distributed by Netflix. His first feature documentary, These Birds Walk, premiered at SXSW and is distributed by Oscilloscope Laboratories. These Birds Walk was recently named one of the 50 best foreign films of the 21st century by the New Yorker. Bassam is a TED Fellow and was named one of Filmmaker Magazine’s “25 New Faces of Independent Film”. He was an inaugural fellow of the Sundance’s Art of Non-Fiction Residency and participated in the 2017 Sundance Screenwriters’ Intensive. Mogul Mowgli is his debut narrative feature. He lives between New York and Texas with his two boys and wife.

“A poignantly propulsive and furiously constructed story by director Bassam Tariq about inherited pain of the flesh and the soul.” – Carlos Aguilar, Los Angeles Times

“Tariq stitches domestic drama, satire and magical realism into a tissue of moods and meanings, held together by the shattering credibility of Ahmed’s performance.” – A.O. Scott, New York Times

“This is an intimate story, sometimes uncomfortably so, but it’s also an expansive one, about whether our societies allow people to live outside prescribed boxes and whether it accepts them when they do.” – Emily Zemler, Observer

“In its entirety, Mogul Mowgli is a cinematic experience that will resonate with the heart and enlighten the mind.” – Stephanie Archer, Film Inquiry