When Dian was 6 years old, she heard a deep rumble and turned to see a tsunami of mud barreling towards her village. She remembers her mother scooping her up 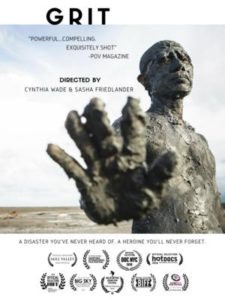 to save her from the boiling mud. Her neighbors ran for their lives. Sixteen villages, including Dian’s, were wiped away. A decade later, nearly 60,000 people have been displaced from what was once a thriving industrial and residential area in East Java, located just 20 kilometers from Indonesia’s second largest city. Dozens of factories, schools and mosques are submerged 60 feet under a moonscape of cracked mud. The majority of international scientists believe that Lapindo, a multinational company that was drilling for natural gas in 2006, accidentally struck an underground mud volcano and unleashed a violent flow of hot sludge from the earth’s depths. Ten years later, despite initial assurances to do so, Lapindo has not provided 80% of its promised reparations to the hundreds of victims of who lost everything in the mud explosion. While the survivors live in the shadow of the mudflow and wait for

restitution, they live in makeshift rented homes next to levees that hold back the still flowing mud. Dian is determined to rise out of the muddy life. She and her mother, along with many

neighbors, fight against the corporate powers accused of one of the largest environmental disasters in recent history. The gripping documentary film GRIT bears witness to Dian’s transformation into a politically active teenager as she questions the role of corporate power and money in the institution of democracy itself.

Film Festival, and 13 other awards. She was a lead producer on the 2015 fictionalized adaptation of Freeheld, starring Julianne Moore, Ellen Page, Steve Carell and Michael Shannon. Wade’s 2013 HBO documentary Mondays at Racine was nominated for an Academy Award in 2013. She is the director of the documentaries Grist for the Mill (1999, HBO), Shelter Dogs (2004, HBO), Born Sweet (2009), Living the Legacy (2009, Sundance Channel) and Generation Startup (2016, Netflix), and producer of The Gnomist (2015, CNN). She holds a BA from Smith College and an MA in Documentary Film Production from Stanford University. Wade has won more than 45 film awards worldwide.

International Film Festival and Special Mention for Outstanding Cinematography at the LAAPFF. At the One World International Human Rights Film Festival in Prague, the Václav Havel Jury gave a Special Mention Award to Where Heaven Meets Hell for its “exceptional contribution to the defense of human rights.” The Alliance of Women Film Journalists awarded Sasha an EDA Award for Documentary Artistry in March 2013. This ITVS-funded film aired on PBS in 2013. Sasha’s has lived and worked in Indonesia. She is fluent in Indonesian and worked there as a journalist for several years. Sasha holds a BA from UCLA and an MFA in Social Documentary Film from the School of Visual Arts.

For news, screenings and updates go to: gritdocumentary.com/

For more on co-director Cynthia Wade go to: cynthiawade.com