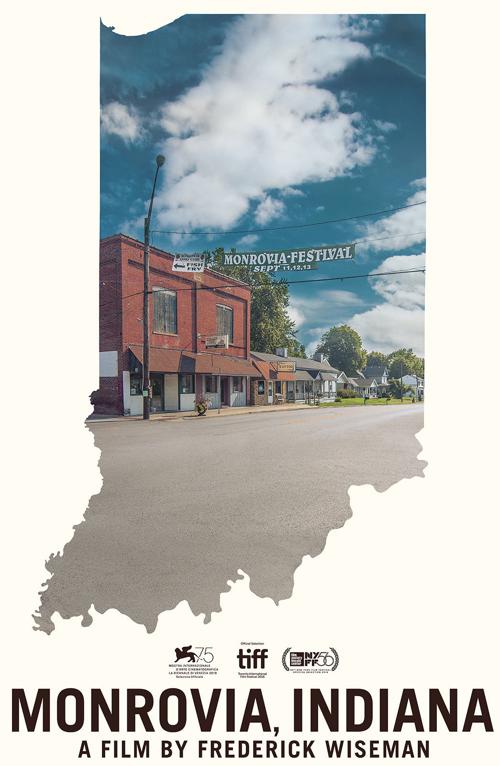 experiences living and working in Monrovia, with emphasis on community organizations and institutions, religion and daily life in this farming community. These towns were once the backbone of American life. While their number and populations have shrunk, the importance of rural America as a formative center of American politics and values was demonstrated in the 2016 presidential election. The film explores the conflicting stereotypes and illustrates how values like community service, duty, spiritual life, generosity and authenticity are formed, experienced and lived. MONROVIA, INDIANA gives a complex and nuanced view of daily life in Monrovia and provides some understanding of a rural, mid-American way of life that has always

been important in America but whose influence and force have not always been recognized or understood in the big cities on the east and west coasts of America and in other countries. Since  1967,  Frederick  Wiseman  has  directed  42 documentaries — dramatic, narrative films that seek to portray ordinary human  experience in a wide  variety  of  contemporary social  institutions. His films include TITICUT FOLLIES, HIGH  SCHOOL, WELFARE, JUVENILE COURT, BOXING GYM, LA  DANSE,  BALLET, CENTRAL PARK, BALLET, LA COMEDIE FRANCAISE, BELFAST, MAINE, and EX LIBRIS – The New York Public Library. At the 2016 Academy Awards ceremony Frederick Wiseman received an Honorary Award (Governors Awards) for a lifetime of brilliant filmmaking. He joins us to talk about his latest cinematic treasure, Monrovia Indiana.

For news and updates on all of Frederick Wiseman’s work go to: zipporah.com

“Rigorously shot, impeccably edited and at times startling in their beauty, these films usher us into often otherwise anonymous spaces and lives, and help make the invisible visible.” – Manohla Dargis, The New York Times

“The result is surprisingly companionable and enjoyable, an unhurried look at a location that is in no kind of rush, a place that is concerned most of all with preserving the way it’s always been.” – Kenneth Turan, Los Angeles Times

“Legendary documentarian Frederick Wiseman turns his camera on a pro-gun, pro-God Midwestern town and gives us a landmark view of what it looks like to live in Trump’s America.” – Peter Travers, Rolling Stone

“A calmly analytical film in which-as ever in Wiseman’s work-extended discussions and public debates are developed with an absorbing dramatic power.” – Richard Brody, New Yorker