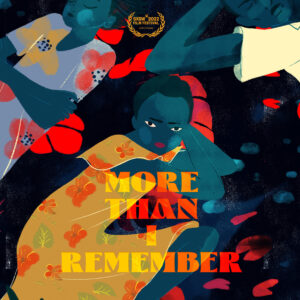 southeastern Congo called Murambya, a Banyamulenge farming community where neighbors provided for one another. One night, when she was just fourteen, she and her family awake to the sounds of bombs — they are under attack by a militia, known as the Mai Mai, who sought their land and cattle and claimed that the Banyamulenge tribe did not belong in Congo. That night, Mugeni flees for her life. She survives the

ambush but loses her family as each person scatters in an attempt to survive. Over the next 4 years, Mugeni searches for her family and stability,

guided by the internal strength she learned from her mom.  Despite unimaginable obstacles, Mugeni’s story is ultimately a portrait of hope, love, and family bonds. Director Amy Bench joins us to talk about her stunningly beautiful and lyrical animated tale of unforgiving pain, suffering and rebirth.

For updates and screenings go to: morethaniremember.com

About the filmmaker – Director / Producer Amy Bench is a filmmaker and visual artist who is drawn to the immediacy of film and photography to tell stories of community and resilience. Trained as a cinematographer, her observational style highlights small details of the human experience that transcend formal explanation. Her camera work has screened at festivals including Berlin, SXSW, Sundance, The New York Film Festival, and at MOMA/PS1 and in 2016 she was named a “DP on the Rise” by Paste Magazine. She was the cinematographer on Trans in America: Texas Strong, which won an Emmy for Best Original Short Documentary in 2019, and 2 Webby Awards. She is the cinematographer on Mama Bears (SXSW 22), a feature-length film that builds on Texas Strong and follows the transformative power of Christian mothers who affirm their LGBTQ children, and is currently filming stories around book banning with director Kim A Snyder. “More Than I Remember” is the second film in a thematic series amplifying voices of those displaced and seeking home in more stable lands. The first in the series, “A Line Birds Cannot See,” won Special Jury Recognition at SXSW, and is now available on The New Yorker, where it won the 2020 Ellie Award from the American Society of Magazine Editors (ASME) for excellence in digital magazine journalism.  For more go to: amybench.com

About the animation – Rich, textured colors and a limitless palette strive to match the breadth of Mugeni’s sensitivity and boldess. Her zest for life is the underlying fabric of the story. The design is grounded in reality while capturing the emotional aspect of being a migrant and refugee. As “home” is a through line in the film, the filmmakers  worked with Animation Director Maya Edelman to carefully consider each landscape Mugeni moves through on her journey. The language of this film is one where these large landscapes and the juxtaposition of simplified character animation allow the audience to focus on Mugeni’s very dense recollections of the horrific circumstances by which she fled her home country, and the trials she surmounted along the way. The team’s approach allows the viewer to witness events in a way that does not distract, glorify, or burden the storyteller with brutal imagery, in turn creating a unique level of intimacy that can transcend what’s possible in other visual forms.

“The film’s florid depiction of Mugeni’s escape arouses all the senses as if survival depended on it, placing one in her shoes as she flees.” – Stephen Saito, The Moveable Fest

“Animation and documentaries go hand-in-hand, and this is a testament to the dynamic storytelling the medium brings to the genre.” – Kate Sánchez, But Why Tho Podcast?

“Shows the Depth of Animated Documentaries.”