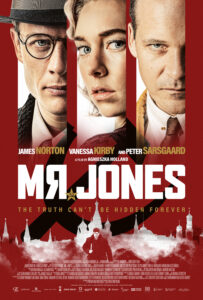 eve of WWII, sees Hitler’s rise to power and Stalin’s Soviet propaganda machine pushing their “utopia” to the Western world. Meanwhile an ambitious young journalist, Gareth Jones (James Norton) becomes famous after publishing an article about his ride on an airplane with the new Chancellor of Germany – Adolph Hitler. Jones uses his political position in the British government as a foreign affairs advisor to David Lloyd George to get privileged access to the Soviet Union. Once there he searches for his next big story, scrutinizing the political and economic situation in Russia. Jones soon learns of government-induced hunger program, known as Holodomor, imposed on the Ukrainian people. The Soviets, with the help of the British and American governments, keep the starvation of 4 to 5 million

George Orwell’s seminal book Animal Farm. Director Agnieszka Holland joins us for a lively conversation on the little known story of mass slaughter prior to the onset one World War II and the craven rationale by the Western Powers willing to look the other way as millions of innocent people perished.

For news, updates and screenings go to: samuelgoldwynfilms.com/mr-jones

Writer’s Statement: “It was for my grandfather, Olexji, and the countless others who suffered under the Soviet regime that I wrote and produced this film. The idea first came to me in my final year of university and followed me to Ukraine after college and to a road trip through Wales shortly before my wedding, and many research trips for several years after. I wanted to tell a story that would honor the millions of victims of Stalin, who has been resurrected under Putinism as a great hero, and expose how Kremlin propaganda works – sometimes with the help of corrupt Western journalists and political leaders. Fifteen years ago, I never imagined this film would be relevant. It was always my intention to unearth buried history not hold up a mirror to our own times. As surreal as this journey has been against the backdrop of growing authoritarianism around the world, I have been heartened by how our story has brought together so many talented, fearless people determined to fight for the truth. Agnieszka, who survived prison under Soviet occupation and lost loved ones to the regime, put so much of herself into this masterpiece. Never could I have written in detail the rich wonderland that she created on screen, poetically guiding the audience through an adventure, while giving greater context to the challenges the world faces today. It has been a testament of faith that this film came together with these brave artists, and the timing for its release could not be more urgent.” – Writer Andrea Chalupa