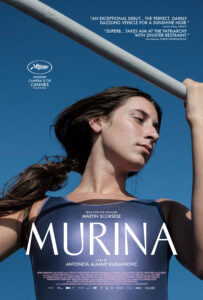 island along Croatia’s Adriatic coast.  Seventeen-year-old Julija (Gracija Filipovic) spends her days diving for eel with her domineering father Ante (Leon Lucev) and watching other teens party on a nearby yacht. Julija bristles at Ante’s heavy handed cruelty and resents her mother Nela’s (Danica Curcic) passivity. She longs for independence but is

unsure how to achieve it, until the arrival of the rich and mysterious Javier seems to offer a way out. Once Ante’s employer and Nela’s lover, Javier (Cliff Curtis) flirts shamelessly with Nela and Julija, setting off a subtle battle of hyper-masculine one-upmanship that pushes Ante to humiliate and control Julija even more. Flattered by Javier’s praise and stories of traveling the world,

Julija sees him as the solution to all her problems. But does his affection portend freedom, or something more sinister? Winner of the Caméra d’Or at the Cannes Film Festival, lensed by award-winning cinematographer

For updates and screenings go to: kinolorber.com/film/murina

About the filmmaker – Antoneta Alamat Kusijanović is a New York based writer, director, and producer born in Dubrovnik. Her directorial feature debut, Murina – a tense family drama set on an isolated island off the Croatian coast – won Camera D’or for the best first feature film at the 74th Cannes Film Festival. Her short Into The Blue was awarded at the 67th Berlin International Film Festival and was nominated for a Student Academy Award. Antoneta is an alumna of the Residence du Festival of Cinefondation, Jerusalem Film Lab, the Berlinale Talent Lab, Sarajevo Talent Lab, La Femis Producing Atelier and Marcie Bloom Fellowship. She holds an MFA in Directing from Columbia University in New York, and a Masters in Producing from the Academy of Dramatic Arts in Zagreb, Croatia.

“Murina is a triumph of familial tension and a spectacular feature debut.” – Christopher Cross, Tilt Magazine

An intoxicating deep dive into oppression, the taste of freedom.” – Alexandra Heller-Nicholas, AWFJ

“A vivid picture of a troubled paradise.” – Steve Pond, THE WRAP